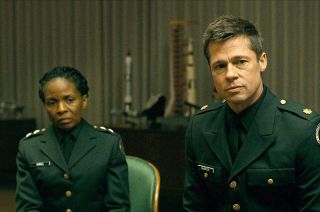 Brad Pitt, as Maj. Roy Bride, appears in a scene with a row of real spacecraft and rocket models, including a Saturn V, in the new film "Ad Astra," directed by James Gray.
(Image: © 20th Century Fox)

In an early scene in "Ad Astra," the new space epic starring Brad Pitt, the camera pans by a small snow globe with an Apollo astronaut inside.

"I always wanted to be an astronaut, for the future of mankind and all," Pitt, as Roy McBride, says, reflecting on his past. The snow globe, an apparent souvenir of McBride's childhood, also serves as one of several nods to real space exploration in the film, which director James Gray said was less sci-fi as "science-future-fact."

"I sort of look at it as an alternate reality, a near future, as if the sixties' space programs that were so awesome, but that slowed down through the decades, would not have slowed down," explained Ethan Gross, who wrote the "Ad Astra" screenplay with Gray, "and so would have kept going, and the moon would have been continued to be visited and built up and we would have gone beyond, to Mars. And then, therefore, by probably 50 or a 100 years from now, maybe, then we'd have the world of 'Ad Astra.'"

Related: In 'Ad Astra,' Brad Pitt Is Stellar, But the Solar System is the Real Star of the Show

Gray's own passion for space history and its aesthetic, informed by his watching space documentaries, helped shape the near future as presented in the film.

"We really looked to that kind of look for the technology and for the science fiction of it, even though it's a future movie," Gross told collectSPACE.com in an interview.

The film never reveals a direct timeline between the past that inspired it and the events that Pitt's McBride experiences, but "Ad Astra" includes several references to real space history.

Spoiler warning: While the following avoids revealing any of the major plot points of "Ad Astra," it does include some minor details.

Roy McBride may have aspired to follow in the footsteps of the Apollo astronauts — another clip from "Ad Astra" shows his boyhood drawing of the Saturn V that took the first humans to the moon — but when he achieves his goal, it is not with NASA. Rather, McBride is an Army Corps engineer working on the "International Space Antenna," a structure that extends into the upper atmosphere, when he is recruited by U.S. Space Command.

Gray and Gross chose Space Command, or SpaceCom for short, because they were not sure if NASA would still be an entity in the future and because McBride's space adventures are not always as virtuous as the civilian agency's dedication to space exploration.

"I don't think NASA will ever go away and I hope it doesn't," said Gross, "but, more importantly, SpaceCom is not as benign or well meaning, in my mind, as NASA. I mean, it's a little more militaristic and that's not really what NASA is all about."

If SpaceCom sounds familiar, it is because the real-life Department of Defense, at the direction of the White House, recently reestablished U.S. Space Command as a unified combatant after 17 years being merged with Strategic Command.

Not that the real SpaceCom has astronauts, nor werewas Gray and Gross influenced or even knew about its current status. They began developing "Ad Astra" a decade before the current administration took office. But by coincidence only, the emblem representing SpaceCom in "Ad Astra" bears more than a passing resemblance to the newly-redesigned U.S. Space Command seal.

The most explicit references to real space history in "Ad Astra" take place when McBride (Pitt) first reports to SpaceCom.

As his new mission is explained to him, McBride sits at a conference table with a row of rocket and spacecraft models behind him. These scale miniatures include a Gemini-Titan II rocket, a Saturn V rocket with gantry tower and launch platform, a Mercury capsule and China's Shenzhou crewed spacecraft.

The models were loaned to the filmmakers by Robert Yowell, a 30-year veteran engineer who worked for NASA and SpaceX. Yowell served as a technical advisor on "Ad Astra" and has a cameo in the film as one of the people passing through the lunar base. Yowell's name can also be spotted on a Mars Colony patch affixed to the interior bulkhead of the Cepheus, the craft that first takes McBride to Mars.

As McBride leaves the SpaceCom conference room, he walks down a corridor lined by a hall of fame-like display of astronauts' portraits, including one of his father, H. Clifford McBride (Tommy Lee Jones). The other honorees though, are all from real life. Recognizable are Apollo 11 crewmates Buzz Aldrin and Michael Collins; Eileen Collins, the first woman to command a space shuttle mission; Mae Jemison, the first African American woman to fly in space; and Bruce McCandless, the first astronaut to perform a spacewalk without tethers.

McAndless' and Jemison's displays also offer the only glimpse of NASA's logo in "Ad Astra," as each as it sewn to their spacesuits.

A much more prevalent logo in "Ad Astra" helps ground the film's future in reality.

"Seeing the name of Lockheed Martin was important because it lends the feeling of authenticity and focus on detail that you cannot reproduce," said Gray. "Because I'll hire the same person who did the corporate logo for some company that is famous and I will try to invent a company and the audience always knows it is fake. Always."

"They know that Lockheed Martin is working on these things," said Gray, referring to the type of vehicles and rockets seen in the film. "So when you see 'Lockheed Martin' on the side of a spacecraft, it sends a message, a message about progress and about where we want to be. This was all part of the plan of the film."

Beyond just a logo, some of the Cepheus' design mimics Lockheed's proposals for a Mars Base Camp, an architecture for moving astronauts from the moon to the red planet. Guy Chriqui, a senior research scientist at Lockheed Martin, served as a consultant to the film.

"They were interested so much in the science, but they also wanted to know how everything looked," said Chriqui in an interview released by Lockheed. "They were real visual people, and that's the language that resonated with them. We showed them photos and a video of some Apollo something astronauts, like, falling over on the moon."

"We talked about everything from nuclear technologies and space elevators to moon buggies," said Chriqui.

Other nods to space exploration history in "Ad Astra" include:

Click through to collectSPACE to see more space history scenes from "Ad Astra."