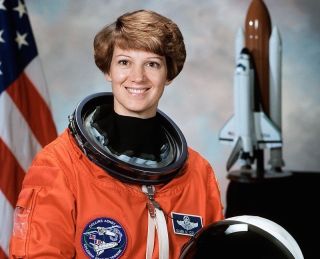 NASA astronaut Eileen Collins, the first woman ever to pilot and command a space shuttle mission, poses for a photo in the leadup to the STS-93 flight of the shuttle Columbia, which launched in July 1999.
(Image: © NASA)

The first woman ever to command a space shuttle mission lamented a perceived lack of leadership in the United States' space program tonight (July 20) during a speech at the Republican National Convention.

Speaking on the 47th anniversary of the historic Apollo 11 moon landing, retired NASA astronaut Eileen Collins urged the nation to reclaim the spirit and glory of the Apollo era.

"We landed on the moon to fulfill a leadership challenge, and to explore," Collins said, referring to President John F. Kennedy's famous 1961 call for NASA to put an astronaut on the moon, and bring him safely home, by the end of the decade. [NASA's Historic Apollo 11 Moon Landing in Pictures]

"We are all so proud of our Apollo program that put our astronauts on the moon first, in peace, for all mankind," she added. "Nations that lead on the frontier lead in the world. We need that visionary leadership again."

Collins pointed to the lack of American crew-carrying spaceships as evidence of a current leadership void.

"In 2011, the space shuttle program ended. The last time the United States launched our own astronauts from our own soil was over five years ago," said Collins, who spent more than 36 days in space over four different space shuttle missions between 1995 and 2005. "We must do better than that."

American astronauts currently launch toward the International Space Station aboard Russian Soyuz spacecraft, but things should change soon. Over the past few years, NASA has been funding the development of private astronaut taxis, including Boeing's CST-100 Starliner capsule and SpaceX's Dragon spacecraft. Both vehicles are on track to begin flying astronauts next year, NASA officials have said.

Collins has been critical in the past of the Obama Administration's 2010 cancellation of NASA's moon-oriented Constellation program. Her four-minute speech tonight didn't include any political jabs or endorsements, though she did wrap it up by echoing Republican presidential nominee Donald Trump's campaign slogan.

Collins wasn't the only one to do some Apollo-gizing tonight. Texas Senator Ted Cruz invoked Apollo 11 as well, linking the historic lunar landing to what he said is a key characteristic of the nation, and the Republican Party in particular.

"That was the power of freedom," said Cruz, who chairs the Senate's Subcommittee on Space, Science and Competitiveness.