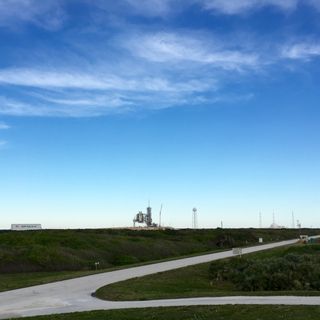 Launch pad 39A at NASA's Kennedy Space Center in Florida, which SpaceX is modifying to accommodate crewed launches aboard its Dragon capsule and Falcon 9 rocket.
(Image: © Sarah Lewin/Space.com)

SpaceX and Boeing are still on track to start launching astronauts to the International Space Station (ISS) in 2017, NASA officials said.

NASA has contracted with both companies in an effort to restart a domestic crew-launch capability that the United States lost when the space shuttle fleet was grounded, in July 2011. For the past five years, the nation has been dependent on Russian Soyuz spacecraft to carry American astronauts to and from the ISS.

NASA said it wants the American astronaut taxis — SpaceX's Dragon capsule and Boeing's CST-100 Starliner capsule — to be operational by the end of 2017. That goal looks realistic for both companies, as long as they continue to meet testing and safety requirements, agency officials said. [SpaceX's Crew Dragon Spacecraft in Pictures]

"We're currently targeting next year for our [first] launch to the space station with those providers," NASA's Misty Snopkowski, a launch-site integrator working with SpaceX, told reporters in a March 21 briefing near NASA's Kennedy Space Center (KSC) in Florida.

Both SpaceX and Boeing will conduct two demonstration flights — one with and one without a crew — before the companies' first operational crewed missions, Snopkowski said. SpaceX plans to recover the Dragon launched on the first demonstration flight for an additional test, she added.

Over the past two years, SpaceX has built a 300-foot-long (90 meters) hangar near KSC's Launch Pad 39A to house the company's Falcon 9 rocket, which blasts Dragon to space. SpaceX has also been modifying Launch Pad 39A — the site from which space shuttles lifted off — and the "fixed service structure" that will provide access to the Falcon 9 and Dragon on the pad, Snopkowski said.

SpaceX is also modifying 39A's "rotating service structure," which provided additional access to the space shuttle but won't be needed for SpaceX's craft. Right now, the company is designing the crew access arm that will let astronauts board Dragon, as well, and should be done with this work by the end of this year, Snopkowski said.

"We're entering the phase of the program where we're further away from all the paperwork and we're getting to see the hardware and we're getting to the operations aspect," she said. "We've been working with the providers to make sure they meet our human spaceflight requirements for the astronauts, and they also have to go through a really rigorous safety-review process to make sure that their design is safe and keeps our astronauts safe on their journey up to the space station."