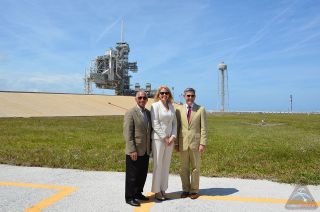 CAPE CANAVERAL, Fla. — One of NASA's most historic launch pads is now under new management.

Launch Complex 39A at Kennedy Space Center in Florida is now under the direction of SpaceX (Space Exploration Technologies), the private spaceflight company headed by billionaire entrepreneur Elon Musk. The launch pad, which was the site where Apollo 11 lifted off on the first manned moon landing in July 1969, will now support the company's rockets and spacecraft as they depart for Earth orbit, and possibly destinations beyond.

"Today, this historic site, from which numerous Apollo and space shuttle missions began, and from which I first flew and left the planet on STS-61C on Columbia, is beginning a new mission as a commercial launch site," said Charles Bolden, NASA Administrator and former astronaut, during a press conference held at the pad. [The Rockets and Spaceships of SpaceX (Photos)]

On Monday (April 14), NASA signed a property agreement with SpaceX beginning a 20-year lease to occupy and use the launch pad. Over the course of the next two decades, the Hawthorne, California-based company will operate and maintain the facility at its own expense.

"Pad 39A is a historic pad, as we all know, and I am so excited that NASA selected us to be one of their partners and also to be their partner in developing 39A as we move forward into the future of space launch," Gwynne Shotwell, SpaceX's president and chief operating officer, said.

"We'll make great use of this pad, I promise," she added.

NASA chose SpaceX to lease Complex 39A in December 2013, after determining it no longer had a use for the 40-year-old pad. Instead, the space agency plans to use Pad 39B, Pad 39A's Apollo-era twin, to support future flights of its Space Launch System rockets and Orion capsules to fly astronauts to the vicinity of the moon and out to Mars.

Since retiring the space shuttle — the fleet's final mission, STS-135 on shuttle Atlantis, lifted off from 39A in 2011 — NASA has sought private companies, such as SpaceX, to provide commercial launch services to low Earth orbit and the International Space Station. Just hours after the lease was signed, SpaceX was set to launch (from another pad) its third NASA-contracted cargo mission to the outpost but the flight was delayed due to a helium leak.

SpaceX intends to start modifying Pad 39A later this year, in preparation for its first launches in 2015.

"We've had architects in our launch site engineering team working for many months on the sidelines," Shotwell said. "We will launch the Falcon Heavy from here from this pad early next year. We'll carry on with additional commercial launches next year, and, if we are granted the pleasure of moving forward in the commercial crew program, we would launch the Dragon capsule with crew here at 39A as well."

SpaceX claims the Falcon Heavy will be the "world's most powerful rocket." With its 27 first stage engines and ability to lift to orbit the equivalent mass of a Boeing 737 jetliner loaded with passengers, crew, luggage and fuel, only the Saturn V, last flown from Pad 39A in 1973, delivered more payload to space than will the Falcon Heavy.

SpaceX representatives have said that the company plans to retain and extend upward the 350 foot high (107 meter) fixed service structure that was added to Pad 39A for use by the space shuttle. The pad's rotating service structure, the large gantry that swung around to envelop the orbiter to install cargo in its payload bay, is not needed for Falcon rockets and may be removed.

"We'll have to build the launch head or launch crown over the infrastructure here, we'll leverage a lot of the plumbing that exists, we will have to bring in some of our own, and critically, we'll be bringing in all of our own instrumentation systems," Shotwell described. "We'll be building a hangar ... to roll the vehicle out, go vertical and launch."

NASA's terms for the lease mandated that several of the pad's more iconic parts be preserved for history, including the gaseous oxygen vent arm mounted at the top of the fixed service structure and the emergency egress bunker, or "rubber room," located under the pad's surface.

Last year, NASA lowered and removed Pad 39A's orbiter access arm. Capped by a "white room" through which the astronauts entered the shuttle, the arm was held for future display.

They'll be some modifications to [the launch pad], but the historic elements we are leaving," Shotwell said.

Pad 39A was originally built in the 1960s to support the Apollo program's Saturn V rocket before being modified to launch the space shuttle. The pad has hosted 94 launches since November 1967, including 12 Saturn V rockets and 82 shuttles. In addition to Apollo 11, 39A also served as the departure site for Apollo 8, the first manned mission to orbit the moon in 1968; the launch of Skylab, the United States' first space station; and STS-1, the first flight of the space shuttle.

"Pad 39A has served the spaceflight program well through Apollo and shuttle," Bob Cabana, director of the Kennedy Space Center and a former astronaut, said. "In fact, my last launch in December of 1988 was from this pad aboard Endeavour as we flew on the first space station assembly mission. It's going to continue to play a vital in our nation's future."

SpaceX now has responsibility for three launch pads: two in Florida, Pad 39A at Kennedy Space Center and Launch Complex 40 at the Cape Canaveral Air Force Station, and one in southern California, Space Launch Complex 4E at Vandenberg Air Force Base. The company has also said it is considering establishing a new launch pad in Texas.

Click through to collectSPACE.com for more photos from the historic hand over of Launch Pad 39A to SpaceX.