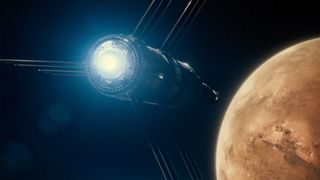 It's hard to ignore the stunning, realistic visualization of our solar system in "Ad Astra."
(Image: © Twentieth Century Fox)

In the new science-fiction blockbuster "Ad Astra," Brad Pitt plays Roy McBride, an astronaut with the U.S. Space Command who embarks on a dangerous, cosmic journey to save the solar system from his own father, a scientist on a lifelong quest to discover intelligent extraterrestrial life.

But, while Pitt delivers a captivating, delicate and dramatic performance, the real star of "Ad Astra" is the solar system. The film is saturated in realistic elements, and none are more striking than the details of space itself. Not to give too much away, but there are *some* planets shown in the film. And they will leave you awestruck. This isn't the first time that realistic planets have been featured in a sci-fi film, but the way they pop off the screen in "Ad Astra" is certainly unique.

One reason why the cosmic visuals in "Ad Astra" are so stunningly realistic is that, particularly for the moon and Mars, the movie incorporates real NASA imagery and footage of space.

"We reviewed a script of Ad Astra early in production," Bert Ulrich, NASA's liaison for film and TV collaborations, said in a statement. "Although there was no NASA storyline, we provided some of the exciting images and footage for the film especially of the Moon and Mars. Sci-fi films like Ad Astra, the Martian, Interstellar, and Gravity take movie audiences out of this world incorporating some of NASA’s most inspirational photography and footage."

The first glimpse you get of a planet in "Ad Astra" is Earth. McBride is seen working on the "International Space Antenna," a massive structure that stretches from Earth's surface into the upper atmosphere. Climbing out onto a ladder-like limb of the structure to do some maintenance work, McBride looks down and sees the Earth below. The view is so realistic that it borders on dizzying.

McBride's journey off Earth begins with a trip to the moon. And, while some of the fantastical elements of his time on the moon (e.g., moon pirates) are more fiction than science, the view of our rocky satellite, the surface of the moon and how people and vehicles move on it in lunar gravity feels very real. A quick(ish) trip to Mars from the moon reveals yet another, stunning destination.

But it's perhaps McBride's final planetary pitstop that delivers the most sumptuous visuals. When McBride arrives on the outskirts of Neptune's rings in an attempt to make contact with his father, who he thought previously was dead, you get a view of the planet in all its brilliant, blue glory.

The film doesn't just show the beauty of the planet, however. After making a tense escape from his father's now-abandoned ship, McBride has to shield himself from the debris that orbits the planet in its rings.

The thrills and drama of a science-fiction film like "Ad Astra" might not be for everyone. But whatever your movie preferences might be, the jaw-dropping cosmic visuals are truly a sight to behold.