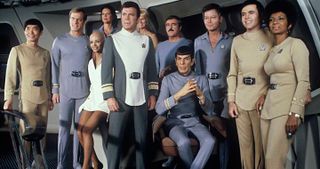 The cast of "Star Trek: The Original Series" pose for a photo.
(Image: © Paramount )

Starting August 2, Fathom Events will begin selling tickets for theatrical showings of "Star Trek: The Motion Picture," which will be back on the big screen for two nights only this September.

The film — Star Trek's first foray onto the big screen — originally premiered December 7, 1979 and reunited the show's original 60s cast for their first new adventure in a decade. Now, it'll return to theaters on September 15 and 18 to mark the film's 40th anniversary — and the 50th anniversary of the original series' final episode, originally broadcast June 3, 1969.

Since then, multiple series and 13 more movies have followed — including an upcoming return to The Next Generation timeline in CBS All Access' "Star Trek: Picard."

Tickets will go on sale through the Fathom Events website starting August 2.

This story was originally published on Newsarama.