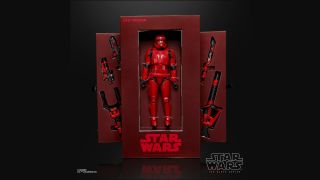 Hasbro's Star Wars Sith Trooper for "Star Wars: The Rise of Skywalker" will make its debut at SDCC 2019.
(Image: © Hasbro)

Lucasfilm has unveiled a new Sith Trooper design that will make its film debut in December's "Star Wars: The Rise of Skywalker" - but it'll be landing on Earth next week for Comic-Con International: San Diego.

In full Disney style, an array of Sith Trooper merchandise is scheduled to debut at SDCC this year. Described by the studio as "the next evolution of Imperial/First Order soldiers," these Sith Troopers merge the classic Stormtrooper design with the Imperial Royal Guard outfits.

Related: The Greatest 'Star Wars' Villains of All Time

"It has some really unique aesthetics to it," said Lucasfilm archivist Madlyn Burkert. "And it has some subtle ties to previous stormtrooper designs, which I think fans will enjoy discovering."