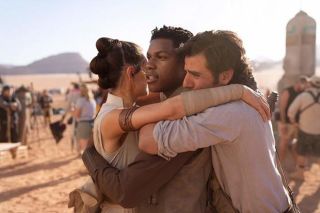 An image purported to be a "Star Wars: Episode IX" poster is floating around on the interwebs. Our sister site GamesRadar+ picked is up here:

That's right — C-3PO with a bowcaster. Why didn't he ever use that skill in the other movies?

On a more serious note, there's a number of new characters present: a fish-head alien over Finn's shoulder, a woman with a fluttering cape next to Chewbacca, and a character that probably isn't the Purple Ranger next to Poe Dameron.

According to purported leaked character sheets over at MakingStarWars.net, those last two would be "Jannah" and "Zorri."

If "Jannah" sounds familiar to you, you might be thinking of the now-non-canon daughter of Han Solo and Leia Organa, Jaina Solo. Naomi Ackie was previously cast for an undisclosed role in Star Wars: Episode IX, and this could be her.

GamesRadar+ speculates that the helmeted Zorri is Keri Russell's character.

Also in the image is a new group shot of what appears to be the Knights of Ren, who were seen briefly in Force Awakens.

Check out the full poster at GamesRadar+.

"Star Wars: Episode IX" is due out December 20.