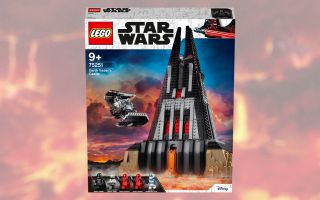 The Dark Side of the Force is strong this Cyber Monday with this last-minute Amazon deal on Lego version of Darth Vader's castle on Mustafar from the Star Wars universe. But this deal will be gone soon, so you'll have to act fast.

Lego's Darth Vader's castle is 40% off in this Amazon Cyber Monday deal. It includes two versions of Vader (Sith Lord and Bacta Tank) and three other minifigures, as well as a TIE Advanced Fighter for a Vader on the go. View Deal

Lego unveiled this Darth Vader's castle set in April as part of Star Wars Celebration, as this year marks the 20th anniversary of Lego's first Star Wars sets. It includes 1,060 pieces, stands over 16 inches tall (41 cm), is 11 inches (28 cm) wide and 9 inches (23 cm) deep to recreate the stunning castle on the volcanic planet Mustafar. You can see a few more photos below.

The set also comes with Vader's TIE Fighter Advanced and minifigures of Darth Vader (of course), two red Imperial Guards, an Imperial Transport pilot and a version of Darth Vader in a Bacta tank, recovering from those pesky lightsaber injuries he got in his fateful duel with Obi-Wan Kenobi.

That duel with Kenobi actually happened on Mustafar, so it's an odd place for Vader to call home. But hey, what ever floats your Star Destroyer, Darth.