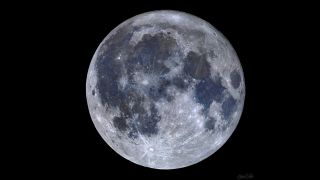 A colorful high-resolution mosaic of the full moon reveals slight differences in the chemical composition of the lunar surface.
(Image: © Miguel Claro)

Miguel Claro is a professional photographer, author and science communicator based in Lisbon, Portugal, who creates spectacular images of the night sky. As a European Southern Observatory Photo Ambassador and member of The World At Night and the official astrophotographer of the Dark Sky Alqueva Reserve, he specializes in astronomical "Skyscapes" that connect both Earth and night sky. Join Miguel here as he takes us through his photograph "A Titanium Moon."

Titanium paints the moon blue in this dazzling lunar view.

This high-resolution mosaic of the full moon combines four panels, each consisting of 30 images, revealing sharp details across the lunar surface.

Taken from the Cumeada Observatory at the Dark Sky Alqueva Reserve in Portugal during the Full Hunter's Moon on Oct. 25, 2018, the final image shows that the moon has a more diverse and colorful surface than is normally perceived by our human eye.

The color of this image — which was rendered in red, blue and green (RGB) color model — has been slightly increased to reveal a strange but accurate representation of the colors of the moon, which correspond to the differences in the chemical constitution of the lunar surface, as changes in mineral content can produce subtle color differences in reflected light. [Latest Moon Photos from NASA's Lunar Reconnaissance Orbiter]

The blue hues that can be seen on the dark maria or "seas" like Mare Tranquillitatis (Latin for the "Sea of Tranquility") or Mare Fecunditatis (the "Sea of Fertility") indicate areas that are rich in titanium. According to the Hawaii Institute of Geophysics and Planetology, the presence of this unusual titanium-rich layer was produced by the crystallization of a huge ocean of magma that once covered the lunar surface.

Near the bottom limb of the moon, white stripe-like features stretch across the southern lunar highlands, appearing to emanate from the iconic 53-mile-wide (85 kilometers) Tycho crater. Above it, slightly to the left of the moon's center, similar features extend from Copernicus crater into Mare Imbrium (the "Sea of Showers").

NASA spacecraft have also mapped the lunar surface in color to study its composition. NASA's Galileo mission to Jupiter created a vibrant false-color mosaic of the lunar surface when it flew by Earth for a gravitational assist maneuver in 1992, and the agency's Clementine spacecraft provided high-resolution maps of titanium and other materials on the lunar surface while it was in orbit around in the moon in 1994.

To capture this view of the moon, I used a Celestron C14 EDGE HD (XLT) telescope, a Nikon D810a camera with ISO 400 and an exposure time of 1/800 seconds. I processed the images on Registax and Photoshop.