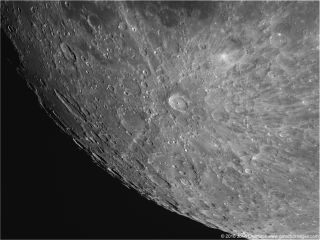 Tycho crater is often the star of many skywatcher images because it's clearly visible on our Moon's surface and can be seen in stunning detail in this image.

"Tycho is about 108 million years of age, and is relatively younger than most craters. You asked how do we know how old it is? This information is based on analysis of samples of the crater ray recovered during the NASA Apollo 16 mission," he wrote in an email to Space.com. [How to Photograph the Moon: A Photo Guide]

About half way between the Straight Wall and the moon's south pole is Tycho crater, named for Danish astronomer Tycho Brahe . Although not the largest crater on the moon, Tycho is one of the brightest, indicating that it is one of the youngest of the craters. It is the point of origin of a huge system of rays which encircle the moon, best seen in about a week when the moon is full. Tycho is 53 miles (86 kilometers) in diameter with classic central peak and terraced walls.

Editor's note: If you have an amazing skywatching photo you'd like to share it with Space.com and our news partners for a possible story or image gallery, send images and comments in to managing editor Tariq Malik at spacephotos@space.com.