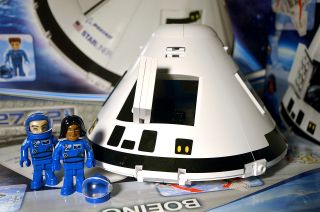 With work underway to return astronauts to space from U.S. soil, you can now piece together one of NASA's new commercial crew spacecraft using a toy kit from Poland.

The Cobi "Boeing Starliner" toy is assembled from 227 blocks of similar in style to LegoEGO bricks. The Polish kit includes blocks printed with markings and a page of decals to add authentic details to the finished model.

The kit, which is intended for builders six years of age or older, is available through Cobi's website for 22.82 euros (or about $26 U.S.).

The Boeing CST-100 Starliner, together with SpaceX's Crew Dragon, are under contract with NASA to deliver astronauts to and from the space station, restoring the U.S. domestic capability lost with the retirement of the space shuttle in 2011 and augmenting the on-going flights of Russia's Soyuz spacecraft. The Starliner is designed to launch atop a United Launch Alliance (ULA) Atlas V rocket and return to Earth under parachutes to an airbag-assisted touchdown on land.

Boeing is now working towards its first uncrewed orbital flight test of the Starliner to launch as soon as August, followed by a crewed flight test that will spend six months at the space station beginning no earlier than late 2019, according to the company and NASA.

Unlike the real Starliner, which at its core is built from upper and lower pressure domes, the Cobi model is pieced together from the bottom up. Over the course of 52 construction steps, the toy takes shape by first assembling the heat shield, then the platform and mount for the spacecraft's five astronaut seats and then finally the walls of the capsule, which unfold like a flower petal to allow full access to the interior of the toy spacecraft.

The Cobi Starliner also features a crew hatch that opens and closes, an overhead, adjustable control panel and two astronaut figures garbed in "Boeing Blue" spacesuits complete with miniature versions of the mission patches that the real crew members will wear when they launch.

The astronaut figures may have been loosely based on Boeing astronaut Chris Ferguson and NASA astronaut Sunita Williams, who are assigned to fly on the first and second Starliner crewed missions, respectively, but Cobi does not specify that detail.

The Cobi Starliner toy does not include the lower mounted service module that will provide the power and propulsion for the real crew capsule.

Fully assembled, the Starliner toy stands about 4 inches tall and has a base about 6 inches wide (10 by 15 centimeters), making the Cobi model about 1:30 the scale of the real CST-100 Starliner.

The included instruction book includes four pages of photos and basic facts about the Boeing CST-100 Starliner and its spacesuit. The booklet and the product's box note that the toy is an officially licensed product of The Boeing Company.

In addition to the Starliner, Cobi also offers building block kits of the Apollo lunar module, the space shuttle Discovery and, coming soon, the Saturn V rocket, under a line of toys licensed through the Smithsonian.

The Cobi Starliner is the third model of the Boeing spacecraft to reach the market after a 1:48 scale desktop display by Daron Worldwide Trading and a steel-part kit from Fascinations' Metal Earth.