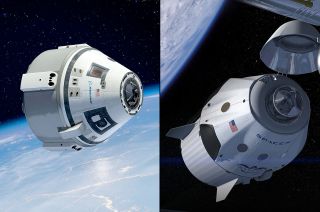 Artist’s illustration of Boeing’s CST-100 Starliner capsule (left) and SpaceX’s Crew Dragon in Earth orbit. Both vehicles are part of NASA's Commercial Crew Program to ferry astronauts to and from the International Space Station.
(Image: © Boeing/SpaceX via @collectSPACE.com)

Since the retirement of NASA's space shuttle fleet in 2011, there's been just one vehicle ferrying crewmembers to and from the International Space Station (ISS): Russia's Soyuz spacecraft.

So, for the past seven years, the American space agency has been paying its Russian counterpart for crew transportation services. The arrangement isn't cheap; each seat on the three-passenger Soyuz costs more than $70 million.

But things will change soon, if all goes according to plan. SpaceX and Boeing have been developing their own reusable astronaut taxis for years, under multibillion-dollar NASA commercial crew contracts. SpaceX's first crewed test flight is currently scheduled for April 2019, and Boeing's is supposed to happen in the middle of that same year. [SpaceX's 1st Crewed Dragon Spaceship Destined for Space (Photos)]

SpaceX holds a separate NASA contract to make uncrewed resupply runs to and from the ISS, using its Falcon 9 rocket and Dragon. The first demonstration flight reached the orbiting lab in December 2010, and operational missions began in 2012.

The gumdrop-shaped cargo Dragon is 14.4 feet tall and 12 feet wide at the base (4.4 by 3.7 meters), with 390 cubic feet (11 cubic meters) of internal volume. It makes parachute-aided splashdowns in the ocean when its work on orbit is done.

Crew Dragon is a modified version of its cargo counterpart, and will also launch atop the Falcon 9. Its astronaut-specific amenities include four big windows; advanced avionics, computer systems and touch-screen displays (including controls for interior temperature, which can be set between 65 and 80 degrees Fahrenheit, or 18 to 27 degrees Celsius); and, of course, seats. Seven seats, to be precise; that's how many people Crew Dragon can accommodate.

Dragon riders will be able to kick back during their trips to and from the ISS, as the capsule is designed to be completely autonomous.

Crew Dragon is also outfitted with an emergency escape system, which consists of eight SuperDraco engines built into the capsule's walls. If something goes wrong at any point during a Crew Dragon flight, these engines can fire up and carry the spacecraft and its passengers to safety.

The SuperDracos have shown their stuff already. During an uncrewed launch abort test in May 2015, the escape system successfully steered a Dragon to a safe splashdown off the Florida coast, as it's designed to do in the event of a liftoff emergency. And six months later, the SuperDracos held a Dragon aloft during a short "hover test."

SpaceX currently has six Crew Dragon capsules at various stages of production and testing, NASA officials have said. The vehicle that will perform the first uncrewed test mission, known as Demo-1, is already being prepped for flight at NASA's Kennedy Space Center (KSC) in Florida.

Demo-1 is scheduled to lift off in November of this year from KSC's historic Pad 39A, which also served as the jumping-off point for NASA's Apollo moon missions. Crew Dragon will travel to the ISS and stay there for a few weeks before returning to Earth for an ocean splashdown.

SpaceX founder and CEO Elon Musk had previously stated that Crew Dragon would eventually be capable of touchdowns on terra firma, using parachutes and retrorocket firings — an approach that could also allow the capsule to land on Mars. But that option is apparently no longer in the works. (And Mars isn't in the offing for Crew Dragon anymore, either; SpaceX is developing a huge rocket-spaceship combo called the BFR to carry people to the Red Planet.)

Boeing's CST-100 Starliner is similar to Crew Dragon in several fundamental ways. It's also a reusable, seven-passenger capsule designed to dock with the ISS autonomously, for example, and it comes back down to Earth under parachutes. ("CST," by the way, stands for "crew space transportation.") Starliner also features sleek touch-screen displays and has about the same amount of internal volume as the SpaceX capsule.

But Starliner touches down on land, not in the ocean, and therefore also sports impact-cushioning airbags at its rounded base.

Boeing's capsule is designed to be compatible with multiple launch vehicles, SpaceX's Falcon 9 among them. But Starliner's first rides to space — including the initial, uncrewed demonstration flight to the ISS, currently scheduled for late 2018 or early 2019 — will take place atop United Launch Alliance Atlas V rockets. [Boeing's CST-100 Starliner: A 21st Century Space Capsule in Photos]

Starliner's emergency escape system consists of four launch-abort engines built into the capsule's service module. Boeing performed a "hot-fire" test of these engines, which were provided by aerospace company Aerojet Rocketdyne, in June and detected a propellant leak shortly afterward. The company traced the leak to a problem with some engine valves and is working to fix the issue, Boeing representatives said recently.

Boeing currently has three Starliner capsules in production, at KSC's Commercial Crew and Cargo Processing Facility, NASA officials said. Each vehicle is designed to be reused up to 10 times.