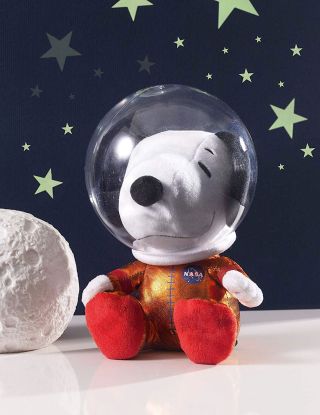 The Astronaut Snoopy plush doll flown to the International Space Station stands 8 inches tall and was made by Hallmark.
(Image: © Hallmark)

Astronaut Snoopy, that classic space pooch from Peanuts, has launched a comeback this year with his own Macy's Thanksgiving Day Parade balloon, Apple TV+ cartoon series, books and yes, toys. And on Thanksgiving (Nov. 28), NASA and Peanuts announced that a new Astronaut Snoopy plush doll is flying in space on the International Space Station!

That Astronaut Snoopy Plush from Hallmark normally retails for $14.99, but Amazon has it marked down to $7.49, saving you 50% this Black Friday. Like any good astro-mutt, Astronaut Snoopy comes with a clear plastic helmet and a metallic orange spacesuit with NASA's meatball logo. It's 8 inches tall and 4 inches wide and long.

This Hallmark Astronaut Snoopy plush is the same version that NASA launched to the International Space Station to help inspire kids (and adults) in the wonder of space exploration. It's the same design as a giant Macy's Thanksgiving Day Parade, too.View Deal

The Astronaut Snoopy Plush is part of a Snoopy celebration of the 50th anniversary of NASA's Apollo 11 moon landing, which occurred in July. Snoopy has also been a mascot for spaceflight safety at NASA, which doles out a Silver Snoopy award to employees who go above and beyond to keep astronauts safe.

In 2018, NASA and Peanuts Worldwide announced plans to launch new Astronaut Snoopy books, clothing and more to both celebrate Apollo 11 and inspire a new generation of kids in space exploration. So it's not surprising that Hallmark's Astronaut Snoopy isn't the only thing on sale this Black Friday.

This classic Astronaut Snoopy design shows a steely-eyed Snoopy on the surface of a Red Planet (we think it's Mars) released in partnership with Peanuts for the Apollo 11 50th anniversary. It has a nylon wristband, Indiglo light-up dial and is water resistant,View Deal

Snoopy looks so excited to be in space in Timex's "All Systems Are GO!" design, and you would be, too, if your space mission was going according to plan. Like the basic Astronaut Snoopy watch, this one features a nylon wristband, is water resistant to a point and an Indiglo light-up dial.View Deal

And there's a few more Astronaut Snoopy Amazon deals out there this Black Friday. here's what we found:

Hallmark's Keepsake Christmas Ornament for 2019 starring Astronaut Snoopy is dubbed "The Flying Ace Goes to Space." Normally $19.99, it's on sale for $18.25 and while that's not a big markdown it may be attractive for space collectors.View Deal

Snoopy flies to the moon in this hardcover children's book from Peanuts Worldwide and NASA. In addition to following Snoopy, red scarf and all, to the moon, the book includes real moon facts straight from NASA. View Deal

Does Snoopy have the "right stuff" to reach the moon? Kids can find out in this adorable story that follows the Peanuts pooch as he trains for launch, with Peppermint Patty and Marcie as his trainers.View Deal

Build your own Astronaut Snoopy with BePuzzler's 3D Crystal Astronaut Snoopy meant for kids age 12 and up. The puzzle features 35 pieces and stands nearly 4 inches tall when complete.View Deal