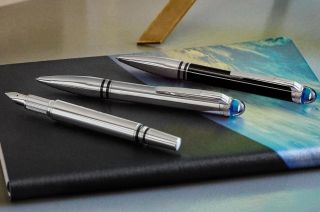 Montblanc's StarWalker line of pens takes a unique perspective on space exploration by looking back at our home planet.
(Image: © Montblanc)

Montblanc is capping its trademark "snow peak" with the much higher perch of outer space.

The luxury pen maker introduced its new StarWalker line of writing instruments on Tuesday (June 11). Each pen is topped by a blue translucent dome beneath the Montblanc six-pointed star or snowcap logo, evoking the view of Earth emerging above the lunar horizon.

"This year marks the 50th anniversary of the landing on the moon," said Nicolas Baretzki, Montblanc's CEO, in a statement. "Most astronauts who had the opportunity to see Earth from space over the years share the same unique feeling — the majesty of our planet is difficult to describe. That's why we decided to take a unique perspective on space exploration by looking back at our planet from the vast expanse of space."

To launch the new line, Montblanc worked with former NASA astronaut Leroy Chiao, a veteran of four spaceflights totaling 229 days off the planet, including a more than 190-day stay aboard the International Space Station. According to Montblanc, Chiao has used the company's pens since he was a student and his wife gave him a personalized one to mark his Expedition 10 mission to the space station in 2004.

"While orbiting the Earth, you realize the majesty of our blue planet … home," said Chiao in his narration for an animated series commissioned by Montblanc and illustrated by Jaehoon Choi to capture the awe that space travelers experience gazing back at Earth. "The Earth is alive … I deeply understand this looking down on our colorful planet."

The new StarWalker collection expresses this same wonder through a choice of materials and colors. In addition to the translucent dome symbolizing Earth as seen from the moon, the black resin of the writing instrument represents the dark vast expanse of space.

The polished platinum-coated cap and barrel are intended to reflect an astronaut. The angled clip cover and dome resemble the shape of a rocket and the cap's screw-on mechanism on the forepart and cone is styled after the way astronauts secure their helmets before embarking for the vacuum of space.

"The StarWalker line is about innovation, engineering and modernity," described Baretzki. "This product line, as well as this new campaign, reminds us to preserve and cherish our planet."

The StarWalker lineup includes a "Precious Resin" model in black with contrasting metal fittings, a Doué edition with a black resin barrel with a metal cap or forepart and a fully metal edition. Each model is available as a fountain pen, ballpoint and fineliner pen.

The StarWalker line of writing instruments is priced between $340 and $800.

Montblanc has also produced a matching notebook ($80) and pen pouch ($250) featuring the view of Earth from space. The planet is printed on a shiny metallic leather that shimmers through the image, creating a 3D effect "as if seeing the sparkling cosmos."