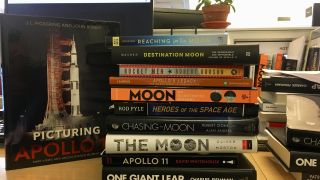 Get excited for the 50th anniversary of Apollo 11 with new space books!
(Image: © Space.com)
JUMP TO:

Here at Space.com, we're gearing up for the 50th anniversary of NASA's Apollo 11 moon landing in July — and with that anniversary comes a barrage of books explaining, analyzing and grappling with humankind's first foray to another world. Get in the anniversary spirit with the below, which are just some of the many, many new books looking back at this pivotal milestone and forward to future moon missions.

Jump through the sections above, or read on for our lists of Apollo retellings; books on the moon, past and future; understanding Apollo; and Apollo photo books. And check back as we approach the anniversary for more!

This autobiography of astronaut Michael Collins, who orbited the moon alone while Neil Armstrong and Buzz Aldrin landed on the lunar surface, sets the standard for astronaut-authored memoirs and provides a definitive but personal account of Apollo 11. "Carrying the Fire: An Astronaut's Journey" has been rereleased as a 50th anniversary edition.

Read an interview with Collins on the book and Apollo 50 years later here.

"Moonbound: Apollo 11 and the Dream of Spaceflight" is a full-color graphic novel that tells the story of Apollo 11, starting way back when the movements of the planets were calculated and speeding through to the development of new technology and science that made the first steps on the moon possible.

The Apollo 11 astronauts may have been the first to touch down on the moon, but Apollo 8 was the first to reach the celestial body — pulled together in four frantic months and demonstrating the best tech NASA had to offer. "Rocket Men: The Daring Odyssey of Apollo 8 and the Astronauts Who Made Man's First Journey to the Moon" focuses on Frank Borman, Jim Lovell and Bill Anders, as well as their families, as they made humanity's first journey to a new world.

'Shoot for the Moon'

"Shoot for the Moon: The Space Race and the Extraordinary Voyage of Apollo 11" is a narratively-focused history of the moon landing that Apollo 11 astronaut Michael Collins called "the best book on Apollo that [he] had ever read." What more is there to say?

'Reaching for the Moon'

By Katherine Johnson (Atheneum Books for Young Readers, 2019) - Out in July

Books for kids will appear in an upcoming list, but we just had to mention this new autobiography by NASA computing legend Katherine Johnson. Johnson's story was publicized by the recent book and movie "Hidden Figures," and through her work with early NASA she had an inside view of the new science and mathematics developed for the epic moonshot. Johnson's work made the Apollo missions possible, and this book will surely inspire children (mathematically-inclined and otherwise) to reach for the stars.

Read more about the autobiography here, and watch Space.com for an upcoming excerpt.

Moon, Past and Future

From the moon's formation 4.5 billion years ago to potential lunar colonies, "Moon: An Illustrated History" steps through 100 past (and near-future) milestones for our neighboring world. The moon has fascinated humanity for millennia, prompting ancient cults, scientific developments and much more. With this book, and its rich illustrations, astrobiologist David Warmflash weaves a tale of lunar geology and humanity's relationship to the dusty orb.

Leonard David, a space journalist and Space.com contributor, explores the past and future of the moon and details how private companies, the U.S., and its allies and competitors might get to the moon and harvest potential resources there. Is a new space race imminent? And if so, what might it look like?

And what will we find?

In "The Moon: A History for the Future," Oliver Morton poetically explores how human understanding of the moon has shaped our knowledge of Earth, and how it's spurred technological growth and scientific thought as well as flights of science fiction fancy.

'Heroes of the Space Age'

Space author (and Space.com contributor) Rod Pyle profiles the pilots, scientists and engineers who worked behind the scenes to make Apollo possible, as well as the people in front of the space race spotlight. Some examples from the promotional material: "Joe Engle was a daring test pilot who set multiple records in the dangerous X-15 rocket plane and later commanded the space shuttle three times. John Houbolt was an engineer who convinced NASA leadership that the most effective way to land on the moon was to use a seemingly risky technique called 'Lunar Orbit Rendezvous,' which worried NASA planners but was the only way to make the landing possible by 1969. Margaret Hamilton was an accomplished mathematician and one of the first female software engineers to design programs for spaceflight software that proved critical to the success of the moon landing. John Casani was a brash young engineer who took over the struggling Voyager program to reconnoiter the outer planets at a time when success was far from certain. And Valentina Tereshkova was the first woman to travel into space aboard Soviet spacecraft Vostok 6." Pyle also includes profiles of more well-known figures, such as Neil Armstrong, Buzz Aldrin and Yuri Gagarin.

How do we understand a transformative event like the Apollo missions to the moon? Many present it as proof of American ingenuity and success, but there's much more to the story. In "Apollo's Legacy: Perspectives on the Moon Landings," space historian Roger Launiuis probes the impacts Apollo had technologically, scientifically and politically, as well as analyzing what we can draw from it to understand the country's modern space program. The slim volume is written as a scholarly text, but it's accessible to anybody with an interest in space history and the circumstances that spawned Apollo.

This companion book to the upcoming PBS series "Chasing the Moon," which will air in three parts from July 8-10, provides a deeper look at the "science fiction writers, filmmakers, military geniuses and rule-breaking scientists" whose imagination led to the Apollo missions. The book folds in science and history — as well as those key personalities — to tell the story of the historic moment.

The Apollo 11 moon landing was an incredible achievement, and "One Giant Leap: the Impossible Mission That Flew Us to the Moon" puts that achievement in the context of social and political history, as well as showing the sweeping effects the project has had on American society since. Apollo didn't necessarily usher in the expected space age, but it certainly ushered in the digital age — and we're still experiencing the impact of that significant milestone.

Smithsonian published an excerpt from the book you can read here.

'The Mission of a Lifetime'

In "The Mission of a Lifetime: Lessons from the Men Who Went to the Moon," author Basil Hero delves into the psychology of what it takes to be a lunar explorer through in-depth interviews with the twelve still-living people who have journeyed there, who he calls Eagles. The book explores what life lessons we can glean from their experiences: mastering emotions, conquering fears and becoming leaders.

According to the publisher: "In 'The Mission Of A Lifetime,' the Eagles share their wisdom and urge us to reframe our view of Earth to theirs: no identifiable nations, borders, or races; just Earthlings working together as a collective civilization."

Check back on Space.com soon for an interview with Hero about the new book.

Historian Douglas Brinkley digs deep into the mindset and decisions of President John F. Kennedy in "American Moonshot: John F. Kennedy and the Great Space Race." Through interviews and newly-analyzed primary sources, Brinkley explores the geopolitical tensions and thought process that led to Kennedy's jump-starting the development of the U.S. space program. Kennedy had an enormous impact on that burgeoning program, and it came to define his presidency.

If you're in the New York City area, you can relive Apollo with Brinkley through an event at the Intrepid Museum in June.

Frank Malina founded NASA's Jet Propulsion Lab and designed the first US rocket to reach space, but he's still relatively unknown. "Escape from Earth: A Secret History of the Space Rocket"  incorporates recently-released FBI files, archived materials and interviews to tell the story of that engineer and his colleagues — including the controversial Jack Parsons — and the wild tale of spaceflight's early years.

By J.L. Pickering and John Bisney  (University Press of Florida, 2019)

In the new book "Picturing Apollo 11: Rare Views and Undiscovered Moments," spaceflight historian J.L. Pickering and journalist John Bisney paint an incredible, vivid picture of what it was really like to be a part of the Apollo 11 mission. The book features a wealth of images from 1969, primarily from January through the lunar landing in July, which show lesser-seen scenes from the Apollo program. From difficult training moments to mundane meetings, the images in this book really humanize the larger-than-life Apollo 11 astronauts. It is easy to look back at Apollo 11 through a romanticized lens, but this book makes it clear just how gritty, funny and real the mission really was. Read our coverage of the book here.

"The NASA Archives: 60 Years in Space" is a large-form visual guide to NASA's history illustrated through hundreds of archival photographs, rare concept drawings and more, bringing viewers from the agency's beginnings to the present day.

Delve deep into the politics of early spaceflight with "The Space-Age Presidency of John F. Kennedy: A Rare Photographic History," which combines a descriptive history with photographs documenting a critical 3-year period near the beginning of the space race. The book also includes speeches, news conferences and once-secret White House recordings to help illuminate Kennedy's thoughts in his own words, complicating our view of him as champion of the Apollo Project.

'First on the Moon'

"First on the Moon: The Apollo 11 50th Anniversary Experience," with a forward by Buzz Aldrin, combines firsthand accounts of the mission, archival photos, reproductions of mission documents and more to tell the story of the Apollo program, the technology created to make it happen and the forces driving it. The book also features exclusive interviews with adult children of the Apollo 11 astronauts. Experienced space writer (and Space.com contributor) Rod Pyle weaves it all together with a deft hand to tell the story of an era.

'Apollo to the Moon'

Teasel E. Muir-Harmony, curator of the Apollo Spacecraft Collection at the Smithsonian National Air and Space Museum, provides an offbeat chronicle in "Apollo to the Moon: A History in 50 Objects." This book tells the story of Apollo through a mix of artifacts (and the stories behind them) and short biographies of key Apollo figures. Many of the objects can be found in the Smithsonian's halls in Washington, D.C. — but for armchair Apollo fans, these stunning photographs may be just the thing.