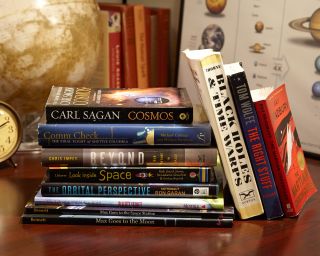 Space.com's editors present a reading list for space and sci-fi lovers, as well as children who are interested in astronomy and spaceflight.
(Image: © Space.com/Jeremy Lips)

There are plenty of great books out there about space — so many, in fact, that it can feel a little overwhelming to figure out where to start, whether searching for a perfect gift or your next engrossing read. So the editors and writers at Space.com have put together a list of their favorite books about the universe. These are the books that we love — the ones that informed us, entertained us and inspired us. We hope they'll do the same for you!

We've divided the books into five categories, which each have their own dedicated pages. On this page, we feature books we're reading now and books we've recently read, which we will update regularly. Click to see the best of:

We hope there's something on our lists for every reader of every age. We're also eager to hear about your favorite space books, so please leave your suggestions in the comments, and let us know why you love them. You can see our ongoing Space Books coverage here.

"See You in Orbit?: Our Dream of Spaceflight" (To Orbit Productions, 2019)

Alan Ladwig, a former NASA manager, dives into the promise of public spaceflight in this new book, which comes as Blue Origin, SpaceX, Virgin Galactic and more take aim at private and commercial space travel.

Buy "See You In Orbit?: Our Dream of Spaceflight" on Amazon.com.

Unidentified flying objects (UFOs) have captured the public's attention over the decades. Rather than aliens, could those piloting UFOs be us — our future progeny that have mastered the landscape of time and space? Perhaps those reports of people coming into contact with strange beings represent our distant human descendants, returning from the future to study us in their own evolutionary past. The idea of us being them has been advanced before, but this new book takes a fresh look at this prospect, offering some thought-provoking proposals. ~Leonard David

"They Are Already Here: UFO Culture and Why We See Saucers" (Pegasus Books, 2020)

Do you remember reading a New York Times story in 2017 that claimed to unveil a Pentagon program dedicated to investigating UFOs? Did you hear rumors about why the FBI closed a solar observatory the next year for then-undisclosed reasons? Are you confused about why there seem to be so many documentaries about alien sightings? "They Are Already Here: UFO Culture and Why We See Saucers" by freelance journalist Sarah Scoles, tackles these questions and many more. Read an excerpt from "They Are Already Here," and read Space.com's interview with the author here.

Buy "They Are Already Here" on Amazon.com.

There's finally a sequel to Michael Crichton's 1969 classic about extraterrestrial life trying to take over humanity from, of all places, Arizona. In "The Andromeda Evolution," author Daniel H. Wilson continues Crichton's work and brings the terrifying tale into outer space. ~Elizabeth Howell

Buy "The Andromeda Evolution" on Amazon.com.

In her new book "For Small Creatures Such as We," Sasha Sagan, daughter of "Cosmos" co-writer Ann Druyan and famed astronomer Carl Sagan, dives into the secular side of spirituality. Upon starting a family of her own, Sagan wanted to have rituals and traditions that would bond them together. But being non-religious, she reevaluated what these traditions could be and this book explores how rituals like holidays can be inspired by the "magic" of nature, space and science rather than religion. ~Chelsea Gohd

Buy "For Small Creatures Such as We" on Amazon.com.

What happens to satellites when they die, and come to think of it, when do they die? Alice Gorman is an Australian archaeologist who studies objects related to spaceflight, and what we can learn by thinking about space through the lens of archaeology. Her book is an engaging story of the ways being human shapes how we go to space. From Aboriginal songs tucked on the Voyagers' Golden Records to the importance of the size of a spacecraft, Gorman offers a new perspective on the history — and future — of space. ~ Meghan Bartels

Read a Q&A with Gorman about the new book and the archaeology of space here.

Buy "Dr. Space Junk Vs. the Universe" on Amazon.com.

Although many believe that the quantum-mechanics revolution of the 1920s is settled science, Lee Smolin wants to disrupt that assumption. Smolin, a theoretical physicist based at the Perimeter Institute in Toronto, argues that quantum mechanics is incomplete. The standard quantum model only allows us to know the position or trajectory of a subatomic particle — not both at the same time. Smolin has spent his career looking to "complete" quantum physics in a way that allows us to know both pieces of information. Smolin's very engaging new book, "Einstein's Unfinished Revolution," offers this unique perspective honed through four decades at the forefront of theoretical physics. ~Marcus Banks

Read a Q&A with Smolin about the new book and the state of quantum physics here.

How do we understand a transformative event like the Apollo missions to the moon? Many present it as proof of American ingenuity and success, but there's much more to the story. In "Apollo's Legacy: Perspectives on the Moon Landings," space historian Roger Launius probes the impacts Apollo had technologically, scientifically and politically, as well as analyzing what we can draw from it to understand the country's modern space program. The slim volume is written as a scholarly text, but it's accessible to anybody with an interest in space history and the circumstances that spawned Apollo. ~Sarah Lewin

In "Finding Our Place in the Universe," French astrophysicist Helene Courtois describes the invigorating quest to discover the Milky Way's home. In 2014 Courtois was part of a research team that discovered the galactic supercluster which contains the Milky Way, which they named Laniakea. This means "immeasurable heaven" in Hawaiian.

In this engaging and fast paced book, Courtois describes her own journey in astrophysics and highlights the key contributions of numerous female astrophysicists. The reader is right there with her as Courtois travels to the world's leading observatories in pursuit of Laniakea, and it's easy to see why the challenge of discovering our galaxy's home became so seductive. Readers who want them will learn all the scientific and technical details needed to understand the discovery of Laniakea, but it's also possible to enjoy this book as a pure tale of adventure. ~Marcus Banks

Read a Q&A with Courtois about her book and the hunt for Laniakea here.

Buy "Finding Our Place in the Universe" on Amazon.com.

By Alice B. McGinty, Illustrated by Elizabeth Haidle

How did an 11-year-old English schoolgirl come to name Pluto? In "The Girl Who Named Pluto: The Story of Venetia Burney," Alice B. McGinty recounts one child's history-making turn on a fateful morning in 1930. Although the book is aimed at kids ages 4 to 8, there's plenty for older children to connect with as well. And the vintage-flavored illustrations by Elizabeth Haidle make the experience a visual delight.

Venetia had connected her love of mythology with her knowledge of science to christen the new planet after the Roman god of the underworld, refusing to let her age or gender to hold her back.

Buy "The Girl Who Named Pluto" on Amazon.com.

In "Delta-v," an unpredictable billionaire recruits an adventurous cave diver to join the first-ever effort to mine an asteroid. The crew's target is asteroid Ryugu, which in real life Japan's Hayabusa2 spacecraft has been exploring since June 2018. From the use of actual trajectories in space and scientific accuracy, to the title itself, Delta-v — the engineering term for exactly how much energy is expended performing a maneuver or reaching a target — Suarez pulls true-to-life details into describing the exciting and perilous mission. The reward for successful asteroid mining is incredible, but the cost could be devastating. ~Sarah Lewin