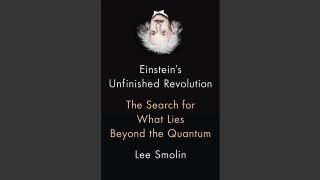 Quantum mechanics is settled science. Case closed, and thank you very much — or so many would argue.

Thanks to pioneering work in the 1920s, many people believe that we now know everything we will ever need to know about motion on an atomic or subatomic scale. According to Danish physicist Niels Bohr and his followers, we can assert either the exact position of an atomic particle or its trajectory, but we cannot do both at the same time. That kind of prediction can only be probabilistic, never absolutely exact.

Theoretical physicist Lee Smolin, of the Perimeter Institute for Theoretical Physics in Waterloo, Canada, has spent his entire career challenging this view. Smolin believes that Bohr's triumph is an example of charisma stifling legitimate dissent, even from such eminent dissenters as Albert Einstein and Erwin Schrödinger.

Today, Smolin, following in the footsteps of Albert Einstein and continuing a long tradition that includes other physicists including David Bohm, seeks a theory to "complete" quantum physics by allowing exact descriptions and not fuzzy probabilities. Smolin holds a "realistic" perspective, as opposed to the "anti-realistic" view of Bohr and his acolytes. Smolin sets out his perspective in "Einstein's Unfinished Revolution" (Penguin Press, April 2019). Space.com caught up with Smolin to discuss the book, how new ideas become dominant in science, and what he is up to now.

Space.com: What's the difference between realistic and anti-realistic approaches to quantum mechanics?

Lee Smolin: To me, the difference between somebody who is a realist about quantum phenomena versus somebody who is not a realist is, as a realist, you believe there is a complete story, and there's a complete description, that we can attain of any atomic process, of any nuclear process, of anything going on in the subatomic world. Quantum mechanics doesn't give such a complete description of each and every process individually, and so it can't be complete. We have to find a deeper theory beyond it. Quantum mechanics is a step towards the comprehension of subatomic physics, but it's not the final step. So the job is to go more deeply and invent or discover a better theory that does give a complete description.

If you're what we call an anti-realist, then you think that quantum mechanics as it was written down in the 1920s is possibly the final theory, and there's no motivation to look deeper.

Space.com: You refer to people who are searching for the completion of quantum theory as "naive realists" because their views don't need convoluted justifications. Can you elaborate on this term?

Smolin: Naive really means sophisticated. Naive means you've heard all the basic objections to the idea that we can give a complete description of the world as it is and reject those and hold it as our goal to understand nature completely and as if we weren't here. Science is a description of nature that's supposed to be objective, not imposed upon by our experiments or by our ideas or our beliefs.

Space.com: Does "naive" mean being completely open to new ideas and beliefs?

Smolin: Completely open? No. People forget that physics, like any science, has a history and a tradition. Take a simple idea like momentum, which should be understood in the context of all the discussion since the 16th and 17th century about the principle of inertia, the principle of relativity, and so forth. You can't explain a concept like momentum without being immersed in the whole history of the concept.

Space.com: Your book is clear and lucid, and it's understandable by people with various levels of background knowledge. What's your writing process?

Smolin: Why, thank you! I'll take that as a compliment. I have a lot of experience and a lot of practice teaching modern physics to nonscientists. At different universities, I frequently taught "physics for humanities" or "physics for poets" courses. So I have a lot of experience with honing different pedagogical strategies to use in teaching quantum physics or relativity to laypeople.

A book like this has several audiences simultaneously. I'm addressing experts and colleagues, but primarily I'm addressing laypeople. And the first layperson who matters is the editor. I always insist on working with an editor who has a degree in literature or humanities or history — not a degree in science. I also have several test readers who have no education in science. They all pushed me to clarify, clarify, clarify and if needed rewrite the book. This particular book went through three complete rewrites. Nothing was left on the cutting-room floor, so to speak. The whole first draft was completely abandoned and reconceptualized, and the result was a much better book, in my opinion.

Related: How a Last-Ditch Hack Led to the Invention of Quantum Mechanics

Space.com: Given that it was completely rewritten multiple times, how long did it take to write the book?

Smolin: Writing is not my day job; my day job is being a theoretical physicist. But in my spare time, so to speak, about three years. There will be a month or six weeks when I'm primarily working on the book, and then six months will go by and I'll reflect and think about it and then I'll plunge in again for three weeks or a month. So it was like that over a period of three years.

Space.com: Your book details the history of quantum physics in the early 20th century. Why did the anti-realist quantum revolution sparked by Niels Bohr become the dominant view — in seemingly the blink of an eye?

Smolin: There were two things that acted simultaneously. One of them, and the most important, was the astounding experimental success. Humanity went in less than 30 years from being reconciled to the idea that matter is made of atoms to a complete theory of atomic physics. And it worked substantially to explain the spectra [the rainbow of colors produced by separating components of light by their wavelength], the forces, the chemical compounds — everything! Then very quickly, nuclear physics, particle physics, how stars work — astrophysics.

So, the experimental success was astounding, and it was quick. Measured against that, the dissent even of people like Einstein, Schrödinger and de Broglie who said, "Wait a minute! The foundations are a mess!" All of that could be swept under the rug.

That was the first thing. The second thing is the prestige and charisma of Niels Bohr, with the support he had from the Danish government and the Carlsberg beer company, to establish a center in which everything came through him. His very hypnotic, charismatic personality could influence the thoughts of a generation of people coming out of a terrible war [World War I]. So it's a bunch of different things at a time.

It is astounding that the pilot wave theory of de Broglie — even if it could be championed by Einstein, by de Broglie and in a way by Schrödinger — had no impact, in spite of the fact that these were not nobodies. These were world famous people with Nobel Prizes, who had done great science, but their dissent could nonetheless be ignored for several generations.

[Pilot wave theory, which Louis de Broglie developed in the 1920s and David Bohm expanded in the 1950s, asserts that electrons encompass  both particles and waves and that particles move in the direction that waves guide them. It is deterministic, not probabilistic.]

I think ultimately scientists are human beings, and we are influenced by all kinds of things, from unconscious bias to ambition to social forces. The history of quantum mechanics becomes a story worth contemplating, but it's not an unusual story.

Space.com: How have your peers reacted to your book?

Smolin: Nothing so far has been surprising. My views are well-known within the community of physicists. However provocative it may seem within the structure of the book, there's no discussion that hasn't been very thoroughly debated among physicists.

The only thing that is new is the last few chapters. I took a big risk to lay my current work on the table.

Smolin: The most important thing I'm doing in my new work is taking seriously the role of nonlocality. [Nonlocality refers to the ability of objects to influence the actions of other objects that are very far apart in space and time.] If you want to give a realistic, complete description of what's going on when you have two particles or more that have interacted and are what we call "entangled," then how you choose to manipulate one of the particles can influence the others, even if they're very far apart. And this means that you have to take seriously that influences aren't constrained by the idea that things only affect what is near to them.

So, I take that seriously, and try to make a theory in which these quantum entanglements are fundamental and the notion of space is emergent. Space doesn't exist; we can make an emergent, approximate description of space in the same way that we use pressure and temperature to describe a gas.

I'm not by any means the only person trying to develop this theory. The idea that space may be emergent from entanglement is an old idea that's getting new traction from people like Roger Penrose. My theory is that space may be emergent, but that time is fundamental and that causality is fundamental. That's a view that a number of people would agree with, and a lot of people would disagree with.

Space.com: What's the ultimate goal of doing this kind of theoretical work?

Smolin: The idea is to develop and invent a theory from which you can deduce predictions which experiments test. Most serious people don't take a theoretical proposal seriously unless it comes with a way to test it, at least in principle if not right now in practice. Without experiment, it's just so easy for a theorist to talk beautiful mathematics, which is wrong and has nothing to do with nature. We need experimentalists to cull the ideas and narrow down the possibilities.

It's only the last generation or two that has the situation that the theories are hard to test. So you can have a whole generation work on, say, particle-physics models that go beyond the standard model and these are not tested experimentally. This is unusual, and unfortunately, characterizes our period.

Many people who are serious in the field of fundamental theoretical physics work very hard to tease out and invent proposals which are testable now. My version of nonlocality predicts that quantum effects are partly due to the fact that atoms are very similar to a vast number of atoms in the universe. If we could create a quantum system that was unique — that had no complete copies anywhere in the observable universe — it wouldn't obey quantum mechanics, it would obey some somewhat different equations which I derive. That is nearly on the threshold of what experimental laboratories in quantum mechanics are able to test now.

This article has been edited and condensed for clarity. You can buy "Einstein's Unfinished Revolution" on Amazon.com.