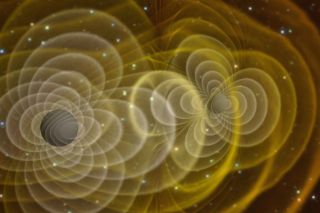 Paul Sutter is an astrophysicist at The Ohio State University and the chief scientist at COSI Science Center. Sutter is also host of the podcasts Ask a Spaceman and RealSpace, and the YouTube series Space In Your Face. Sutter contributed this article to Space.com's Expert Voices: Op-Ed & Insights.

Quantizing gravity — and for the faint of heart, don't worry, we'll define what that means soon enough — can't be that hard, could it? I mean, we've got the other forces —electromagnetism, strong nuclear and weak nuclear — all quantized up like nobody's business. Surely gravity, the feeblest and wimpiest of the forces, would be a piece of cake, a nice little dessert to wrap up our quantum feast. Right?

Well, let's look at a simple example to get the problems started: electron meets photon. What happens? Specifically, what happens in a fully quantum-physics description of the event? Do they just bounce off each other? Can photons even "bounce"? How is energy or momentum exchanged? Will they fall in love, or hate each other at first glance?

There are a few things that make this scenario more complicated than, say, trying to split a restaurant check. One complication is that photons can be created or destroyed at will. It's so easy, you don't even think about it. Flip a switch, and trillions of photons start streaming out of the light bulb, briefly experiencing all the joys and freedoms that life can bring, only to be snuffed out of existence as soon as they hit a wall and get absorbed by its atoms. Heartless and uncaring, you continue about your day. Monster. [Greatest Mysteries: What Causes Gravity?]

And since matter and energy are two sides of the same special-relativistic coin — just as space and time are related under a single framework — if energy can be created or destroyed, then so can mass. You can create photons, and you can create electrons. Have an empty box? Poof, like magic, they can appear! Or disappear! Whatever! Of course, if they do appear, they'll disappear right away — stealing energy from the vacuum to exist for just a little bit; that's all they can muster. But if you already have something — say, a photon zipping about — it can turn itself into an electron and positron without even realizing it. And those particles can turn themselves back into a photon if they feel like it. It's seriously just that easy. Matter and energy are really the same thing, and can change forms as easily as you change your shirt.

Of course, there are rules and limitations, but a true magician never reveals his secrets.

Quantum versus everything else

It's a good thing I'm not a magician, and I can't keep secrets. Here's how this hangs together. On one hand, you have the old-timey, 1800s, beard-and-top-hat view of the world or, in other words, the "classical" picture of physics. This picture is painted in continuous colors — for example, electromagnetic fields that wiggle and wave elegantly and smoothly.

But the quantum picture of reality is completely different — so different, in fact, that we gave its picture a new name: quantum. We called it quantum mechanics. It's in the name, so I thought it would be obvi… never mind. Instead of smooth and continuous, the quantum world is jaggedy and blocky: For example, stuff can have only certain specific energy levels, or certain amounts of angular momentum.

When it comes to electromagnetic fields, the reconciliation between the old-school classical picture and the new-hotness quantum picture was to create — are you ready for this? — a quantum electromagnetic field. Wow! What an insight! So easy. That completely solves everything.

What in the heck does that mean?

Now, we can go back to our original problem: What happens when a photon and electron collide? Well, you can see the difficulty. It's not just a one-on-one straight-up collision. As the electron and photon move, they can occasionally disappear, reappear and even transform into each other (as easily as one field transferring energy to the other). So you have to start adding up all the possible collisions: regular electron plus photon; electron plus two photons; electron plus electron plus positron; on and on and on.

But when you start adding up all of these corrections and additions, you get into trouble. There is an infinite number of possible combinations of interactions. Infinity. Crud. Nature's ultimate swear word. You can't tell nature's story while cussing; it's just wrong. When infinities crop up, you can't make progress, you can't make predictions, you can't make science.

Thankfully, a few decades ago, some brilliant physicists like Richard Feynman figured out a few tricks. Through clever manipulation, they could package up all the mathematical terms that blew up into infinity — and there were a lot of them — into just a handful of places. Still infinity, but not in so many places in the equations. Then, they made a clever identification. Those particular terms represented things that we already knew, like the mass of the electron. Just pop the experimentally known electron mass into that spot, and we're good! OK, so our fancy theory can't predict everything, but through this process of scrubbing the infinities clean, we can make some progress and learn new things. It seems shady, but it works.

This is the world of quantum field theory (and every time someone abbreviates "quoted for truth," this is what I think instead, and it's much funnier). QFT has made incredible progress in describing the interactions of all particles and three out of the four forces.

Now, what about gravity?

One of the many issues is that gravity isn't really a force like the other forces are. Gravity is all about space-time , and space-time is the stage on which all the particles strut their stuff as the actors.

In the normal QFT world, that stage stays fixed and unmoving throughout eternity, allowing us to focus on all of the interaction inanity. But general relativity tells us that the stage is alive, too. It bends and warps under the influence of the actors, and that bending and warping redirects the actors' motions. And when we look back at our basic electron-photon interaction under a quantum field picture, we start to get migraines. We have to take into account not only every possible combination and permutation of photons and electrons interacting, but also all possible configurations of space-time underneath them!

The infinities are too much to handle. We can't find clever ways to package them up. We can't forget about them and pretend they don't exist. We can't patch over them with known measurements. The math is too complicated. There are simply too many possible configurations of both the interactions and the underlying space-time. We can't make the math simple enough to solve; our mathematical models lose their predictive power. They break down.

There are clever ideas out there, like loop quantum gravity ("What if space-time is pixelated … wouldn't that be awesome?") and string theory ("What if we radically alter our concepts of particles … wouldn't that be awesome?"), but neither of these has made much theoretical headway in the past few decades, and both suffer from a severe lack of testable predictions. There simply isn't much evidence to guide our models; our particle accelerators lack the punch needed to probe physics at these scales.

That's why places like black holes and the early universe are so compelling to theorists: They're places where gravity is both small and strong, and by studying those scenarios, hopefully we can get a glimpse of how to correctly treat gravity. In the meantime, though, we can only shrug.

You may have heard of the graviton, the "particle" that carries gravity. But that concept comes from trying to paint gravity with quantum mechanical colors. And we know that simply doesn't work — at least not yet. Until further notice, there simply isn't a real thing you can point to and say, "That's a graviton."

What is the ultimate resolution? We know we live in a quantum world, but we can't figure out a way to describe gravity without swearing. And that is infinitely annoying.

Learn more by listening to the episode "What's the beef with quantum gravity?" on the Ask A Spaceman podcast, available on iTunes and on the Web at http://www.askaspaceman.com. Thanks to Damian Kasny for the question that led to this piece! Ask your own question on Twitter using #AskASpaceman or by following Paul @PaulMattSutter and facebook.com/PaulMattSutter.