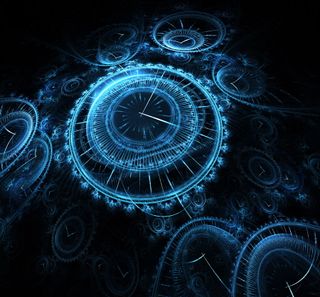 Most physicists think time is a subjective illusion, but what if time is real?
(Image: © Shutterstock/Kim D. French)

The universe may have been borne inside a black hole, and the black holes in our own cosmos might be birthing new universes of their own, if one physicist's controversial idea about time is true.

Going against the standard view of most scientists, theoretical physicist Lee Smolin has suggested that time is real, rather than the illusion that Einstein's theory of relativity makes it out to be. Smolin, who's based at Canada's Perimeter Institute for Theoretical Physics, outlines the idea in his new book "Time Reborn" (Houghton Mifflin Harcourt, April 2013).

SPACE.com caught up with Smolin recently to learn more about this theory, and the real nature of time. [Video: How Long Is Time?]

SPACE.com: What does it mean for time to be real or not real? Isn't time obviously real?

Smolin: In the physicist's conception of nature, as developed from Newton to Einstein, time becomes a secondary concept. It becomes replaced by a notion of computation, so that a process carrying out in time and causing things to happen becomes modeled by a logical computation. Logic and mathematics are outside of time, and therefore if that modeling is completely accurate, time is unreal.

For example, Einstein is famously quoted as saying that people who understand physics know that the distinction between the past, present and future is only a stubbornly persistent illusion.

SPACE.com: When you say time is real, in contradiction to these ideas by Einstein and others, then what does that mean?

Smolin: First of all that the experience that we have of being in the present moment, which is one of a flow of moments succeeding each other, is not an illusion as Einstein and others asserted — it's the deepest clue we have as to the nature of reality.

Reality is structured to a series of moments so that anything that is real is real in a moment of time, and if something appears to persist in time, that's because it's continually renewing in time, in the moments of time, which are the reality of existence. Any truth about the world is a truth about the world within time — there are no timeless truths. And most importantly, there are no laws of nature that are outside of time. Everything changes, including the laws.

SPACE.com: So how does this concept help us understand the laws of nature?

Smolin: The main reason why I advocate this new view of time is because it may make the laws of nature explicable. And by that, I mean the scientific answer to the question of why the laws of nature as we observe them have been selected to be what they are.

SPACE.com: How does your theory of the dynamical evolution of the universe work?

Smolin: The idea is that the universe evolved in a way which is very analogous to natural selection in a population, say, of bacteria. To do this the universe needs to reproduce itself, and I took over an older idea by John Wheeler and Bryce DeWitt, who were pioneers of quantum gravity. Their idea was that black holes become the seeds of the birth of new universes. [5 Reasons We May Live in a Multiverse]

John Wheeler had already speculated that when this happens, the laws of nature are reborn again, in the new baby universe; he called it reprocessing the universe. What I had to add to this to make it work like a model of natural selection, was that the changes passed form parent to child universe are very slight so there can be an accumulation of fitness. This hypothesis leads to the conclusion that assuming our universe is a typical member of this population of universes as it develops after many, many generations, that the universe is going to be finely tuned to produce many black holes. That leads to the next hypotheses that if you change the laws, and the numbers that specify the laws, then typically you're going to make a universe that makes less black holes, and that's something that leads to predictions that can be tested.

That's the theory that I call cosmological natural selection.

SPACE.com: How would these universes pass on their traits to daughter universes?

Smolin: At the level in which I propose this theory I didn’t answer that question, just like Darwin had no idea how inherited traits were inherited, because he didn't know anything about the molecular basis of genetics, which was only discovered with DNA. So I was able to make those predictions without specifying the microscopic basis of inheritance in cosmology.

SPACE.com: Just how are new universes born inside black holes?

Smolin: A star that collapses into a black hole very quickly squeezes down to infinite density and time stops — that's according to general relativity. And basically that moment when time stops is deferred by quantum mechanics, by quantum uncertainty, and rather than collapsing to infinite density, the star collapses to a certain extreme density, and then bounces back and begins to expand again. And that expanding star becomes the birth of a new universe. The point where time ends inside a black hole becomes joined to the point where time begins in a Big Bang in a new universe.

SPACE.com: Does this idea have testable predictions?

The other prediction has to do with the cosmic microwave background radiation and the hypothesis of cosmological inflation. The observations of the Planck satellite are completely consistent with the version of inflation that cosmological natural selection supports.