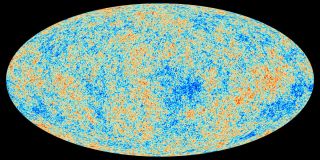 This map shows the oldest light in our universe, as detected with the greatest precision yet by the Planck mission. The ancient light, called the cosmic microwave background, was imprinted on the sky when the universe was 370,000 years old. It shows tiny temperature fluctuations that correspond to regions of slightly different densities, representing the seeds of all future structure: the stars and galaxies of today. Image released March 21, 2013.
(Image: © ESA and the Planck Collaboration)

A map of the universe based on its oldest light is giving astronomers hope that they may be able to answer some of the deepest questions of the cosmos, including how it got started.

Scientists met this week at the University of California, Davis to pore over the treasure trove of data published two months ago from the European Planck spacecraft. The observatory measures what's called the cosmic microwave background — light spread across the sky that dates from soon after the Big Bang that kick-started the universe.

"We have the best map ever of the cosmic microwave background, and that shows us what the universe was like 370,000 years after the Big Bang," said Charles Lawrence, a scientist at NASA's Jet Propulsion Laboratory in California who is the lead U.S. scientist on the Planck project. Lawrence and other researchers summed up the consequences of the meeting, called the Davis Cosmic Frontiers Conferences, in a call to reporters Friday (May 24). [Gallery: Planck Spacecraft Sees Big Bang Relics]

The cosmic microwave background (CMB) was first discovered in 1964, and since then a series of experiments, culminating in Planck, have measured it in increasing detail, providing cosmologists a direct line to test theories about the beginnings of the universe. Planck launched in 2009, and the recent data represent the product of the spacecraft's first 15.5 months of observations.

"Rarely in the history of science has there been such a triumphant transformation from really complete ignorance to really deep insights in just a few decades," said Andreas Albrecht, chair of the University of California, Davis Department of Physics.

The CMB has provided strong support for the theory of cosmic inflation, which suggests that the universe ballooned in size during a period of exponential growth within the first fraction of a second after the Big Bang. Variations in the temperature of the CMB light are thought to correspond to tiny density ripples in the universe caused by quantum fluctuations when it first formed. These ripples, in turn, gave rise to the structure we see today in the form of stars, galaxies and clusters of galaxies.

Studying the CMB's variations in detail could help scientists differentiate between various models of inflation, and answer the many unsolved puzzles remaining, such as what happened before inflation, what sparked it, and which version of inflation took place.

"If it weren't for the wonderful data, I'd be thinking maybe some of these problems are too difficult for us right now," Albrecht said. "But it's thrilling to be inspired by all this data and the tremendous success we have had with the theories so far to really plunge in and wrestle these deep questions."

Already some "anomalies" in the Planck data appear to deviate from the standard expectations, and if borne out, these deviations could point the way toward new physics, scientists say. For example, the basic picture of inflation predicts that the universe should have expanded uniformly in all directions, but the CMB's temperature variations appear to be sixed and spaced differently toward one side of the universe than the other. In addition, the variations don't seem to behave the same on small scales as they do on large scales.

"It's hard to know what to make of these anomalies," said Lloyd Knox, a University of California, Davis physicist who's leading the U.S. team inferring cosmology parameters from Planck's data. "That these are real features of the microwave background sky has really been firmed up by Planck, but how to make sense of them isn't clear, so there's some excitement about them and some people are going after this as a clue."

Ultimately, all of the scientists expressed their thrill at being able to plunge into some of the thorniest questions about the universe using the exquisite data from Planck. Right now, they said, astrophysicists have a rare opportunity to make huge leaps in progress, and the researchers consider themselves lucky to be working at this point in the history of science.

"I don't think you could do better than doing cosmology right now; it's just amazing," Albrecht said.