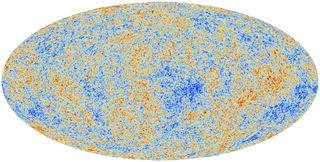 This image unveiled March 21, 2013, shows the cosmic microwave background (CMB) as observed by the European Space Agency's Planck space observatory. The CMB is a snapshot of the oldest light in our Universe, imprinted on the sky when the Universe was just 380 000 years old. It shows tiny temperature fluctuations that correspond to regions of slightly different densities, representing the seeds of all future structure: the stars and galaxies of today.
(Image: © ESA and the Planck Collaboration)

The universe is 100 million years older than thought, according to the best-ever map of the oldest light in space.

The adjustment brings the universe's age to 13.82 billion years, and means space and time are expanding slightly slower than scientists thought.

These discoveries come from a new all-sky map of ancient cosmic light by Europe's Planck mission, which has measured what's called the cosmic microwave background in greater detail than ever before.

"Astronomers worldwide have been on the edge of their seats waiting for this map," said Joan Centrella, Planck program scientist at NASA Headquarters in Washington, in a statement. NASA contributed technology for the Planck spacecraft, which is managed by the European Space Agency. "These measurements are profoundly important to many areas of science, as well as future space missions."

The cosmic microwave background (CMB) is light dating from just 380,000 years after the Big Bang. Before that time, the universe was so hot and dense that light couldn't travel through space without getting mired in a thick plasma of protons and electrons. When the universe finally cooled and expanded enough for atoms to form, light could travel freely for the first time, and this light has been flying through the universe ever since. [Photos: Planck Sees Big Bang Relics]

Astronomers first discovered the CMB by accident in 1964, and have been studying it ever since because of the precious clues about the universe's beginnings embedded in it.

For example, though the CMB is spread throughout space, it isn't entirely uniform. It displays small variations in temperature at different spots that scientists think correspond with regions of the early universe that were slightly more or less dense with energy. These fluctuations are thought to have been the seeds that eventually caused matter to clump in the denser spots and over time evolve into galaxies and stars and planets.

The new map shows these variations in more detail than ever before, and could help scientists distinguish between different theories of how the universe began. In general, Planck's measurements are consistent with a theory called the Standard Model, which posits that the variations in the CMB were caused by tiny random quantum fluctuations. However, the new map shows tantalizing hints that physics beyond the Standard Model may be needed to fully explain the CMB.

In particular, the CMB variations don't match the Standard Model's predictions at large scales, though they do on small scales. Other odd discoveries, such as a cold spot that is much larger than expected in one area of the sky, add to this picture.

"The extraordinary quality of Planck's portrait of the infant universe allows us to peel back its layers to the very foundations, revealing that our blueprint of the cosmos is far from complete," said Jean-Jacques Dordain, director general of the European Space Agency.

"Our ultimate goal would be to construct a new model that predicts the anomalies and links them together," said George Efstathiou of England's University of Cambridge. "But these are early days; so far, we don’t know whether this is possible and what type of new physics might be needed. And that’s exciting."

Planck launched in 2009, and the new map is the culmination of the spacecraft's first 15.5 months of observations.