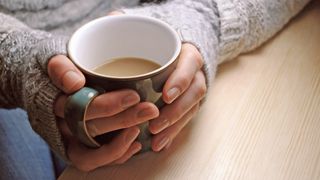 Why does this coffee radiate in the infrared?
(Image: © Shutterstock)

Paul M. Sutter is an astrophysicist at The Ohio State University, host of Ask a Spaceman and Space Radio, and author of "Your Place in the Universe" (Prometheus Books, 2018). Sutter contributed this article to Space.com's Expert Voices: Op-Ed & Insights.

Let's say you've got some random object in front of you — how about a nice hot cup of coffee? You can see the cup and the coffee, of course, because light from your lamp is reflecting off it and into your eyeballs. And you can feel its warmth as you grab the mug. But hold your hand just beside the cup. You still feel a bit of warmth, don't you?

That's because the cup of coffee is indeed making its own kind of light, but it's not the visible kind. It's emitting light with a wavelength longer than the deepest red you could possibly imagine. What's below the red? Infrared. It may not be visible, but it's still a kind of light.

But your coffee cools while sitting on your desk, and eventually, you won't be able to feel the radiating warmth.  Why did the hot cup of coffee emit radiation that you could feel, but the cold cup of coffee didn't? Who decides what kind of radiation is emitted when?

This was a huge, burning question in the minds of 19th-century physicists, who had been studying a particular kind of radiation called blackbody radiation. The name comes from the experimental device used to investigate this phenomenon: a box coated in black on the interior, with a teensy-tiny pinhole for viewing.

Using this blackbody contraption, physicists discovered some important things about the universe. For one, the hotter an object is, the more light it gives off. Second, the hotter it is, the higher-energy light it gives off. A cool cucumber may only emit weak infrared waves, or even weaker microwaves. Extremely hot objects like the surface of the sun will glow in visible light. Even hotter objects spew ultraviolet, or even X-ray, light.

The problem the physicists were grappling with was one of connection. How does the temperature of an object determine what kind of light it emits? In the prevailing model at the time, a vibrating atom or molecule would divide its energy equally, parsing it out to all the wavelengths of lights possible.

This model is, of course, wrong, because your hot cup of coffee doesn't spit out X-rays into your hand every time you pick it up. But nobody had a better idea.

At the turn of the 20th century, a physicist by the name of Max Planck ... didn't have a better idea, either. Instead, he had a really, really bad idea. He had been kicking around this problem for quite some time, and by his own admission, what he did next was basically an ugly hack, an attempt of last resort to try to find something, anything that could explain blackbody radiation.

His ugly hack was this: He introduced a constant, a single number that connected how energy from inside the walls of the blackbody chamber transformed into radiation.

Planck's constant also had another remarkable implication: It said that light could be emitted only in finite, discrete chunks, later called photons. At a given wavelength, there was a smallest amount of light that could possibly exist. You couldn't make half a photon, or 64.4 photons, for example; you could only make whole numbers of photons.

This little hack completely solved the blackbody problem. A warm object has a certain amount of energy available to make radiation. Your coffee might love to make X-rays — but X-rays are expensive, and it can't make half an X-ray. Instead, it has to settle for the budget-friendly infrared radiation.

Planck first proposed this little nugget of an idea in a 1900 paper, and the concept was later picked up by Albert Einstein himself. From there, the idea grew. Perhaps it's not just energy that's released in discrete, finite packets. Perhaps it's many things. Perhaps reality, at its most fundamental, subatomic level, is … quantized.

That single realization opened the door to what we now call quantum mechanics: that the physics of the very small is based on discrete packets of energy, momentum, and more. It turns out that the rules of the universe at subatomic scales don’t look very much like our macroscopic rules, and we have Max Planck (accidentally) to thank for it.

Learn more by listening to the episode "Who's in charge of the quantum world?" on the Ask A Spaceman podcast, available on iTunes and on the web at askaspaceman.com. Thanks to Nir Ben Z., Brent R., Frankie C., vicki K., DiaLogical, Katya N., and @fellabear for the questions that led to this piece! Ask your own question on Twitter using #AskASpaceman or by following Paul @PaulMattSutter and facebook.com/PaulMattSutter. Follow us on Twitter @Spacedotcom and on Facebook.