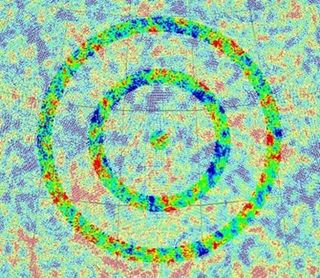 Some researchers think concentric ring patterns in measurements of the cosmic microwave background are evidence of a universe that existed before our own was born in the Big Bang.
(Image: © Roger Penrose and Vahe Gurzadyan)

The sky holds many wonders, such as stars, galaxies, supernovas, neutron stars and black holes, but now scientists claim it could hold something potentially more extraordinary — hints of an earlier universe, or even other universes.

However, a number of other researchers dispute these findings as evidence for past and other universes, suggesting that it could be easy to see something that isn't there in the data.

Circles in the sky?

The evidence in question is said to lie in the haze of microwaves permeating the cosmos that was left over after the Big Bang. This light, and patterns within it, has granted scientists a picture of the earliest years of the universe.

However, a little over a month ago, a pair of physicists said they found something potentially even more extraordinary in this radiation — giant rings they said could be evidence of a universe that existed before the Big Bang roughly 13.7 billion years ago.

The cosmic microwave background is normally slightly blotchy, showing variations in hot and cold that apparently originate from microscopic fluctuations in the very earliest moments after the Big Bang. Recently, a pair of researchers claimed to have found concentric ring patterns where this radiation is less patchy than normal.

So what are these circles within circles? They might be nothing less than the aftermath of collisions of supermassive black holes in a past universe, akin to ripples in a pond, according to calculations from mathematical physicist Roger Penrose at the University of Oxford in England and physicist Vahe Gurzadyan at Yerevan State University in Armenia that appeared online Nov. 16.

However, their analysis has been greeted with skepticism, to put it mildly. Papers from no less than three different groups of researchers have appeared contesting their interpretation.

"It looks to us as if they made quite a simple error in the end," cosmologist James Zibin at the University of British Columbia in Vancouver, a co-author on one of the rebuttal papers, told SPACE.com.

Zibin and the other researchers said they could see the rings of reduced fluctuations that Penrose and Gurzadyan proposed. However, they went on to simulate how the cosmic microwave background might appear given inflation, the theoretical process by which the universe is thought to have expanded very rapidly in the first split-seconds after the Big Bang.

"We saw the same kinds of patterns in those simulations," Zibin said.

But Zibin and his colleagues are not suggesting they saw circles in the sky. Just because there are patches of sky that are less splotchy with microwave fluctuations, and that those patches could match up to part of a ring doesn't mean a ring is there. "You can convince yourself to see lots of things," he said. "There's a famous story of someone identifying what looked like 'S' and 'H' in the cosmic microwave background, and the joke is these are Stephen Hawking's initials."

"Penrose has a nice theoretical model, but so far there is no indications in the data on whether the model describes our universe or not," theoretical physicist Ingunn Kathrine Wehus of the University of Oslo, a co-author of one of the rebuttal papers, said in an email interview.

Scientists have long speculated that our universe might not be alone, but instead could be one of many in a vast "multiverse." As opposed to the former scenario, where scientists are looking for evidence of a universe predating our own, these vast multiverses could exist simultaneously with ours.

In a separate recent project, a team of researchers led by Cosmologist Hiranya Peiris of University College London suggests that the cosmic microwave background displays evidence of collisions between our universe and others. These findings, they say, could prove that our universe resides in a single bubble embedded in the multiverse.

When our bubble expanded during inflation, it might have collided with another bubble. In a paper posted online Dec. 9, they suggest this impact could leave a mark. Indeed, they contend, data from NASA's Wilkinson Microwave Anisotropy Probe (WMAP) space observatory, which studies the cosmic microwave background, suggests there is a preferred direction in the universe that one might expect from such a collision.

"They looked at 15 different indicators, and four seemed to be consistent with their scenario," cosmologist Arjun Berera at the University of Edinburgh in the United Kingdom, who did not take part in this study, told SPACE.com.

Peiris and her colleagues cautioned that their tentative findings were far from conclusive proof for a multiverse. However, the European Space Agency's Planck space observatory launched in 2009 could provide more precise data to answer the question.

"The story's not over," Berera said.