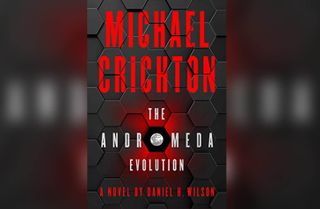 There's finally a sequel to Michael Crichton's 1969 classic about extraterrestrial life trying to take over humanity from, of all places, Arizona.

"The Andromeda Strain" (Knopf, 1969) depicts the aftermath of a satellite crash in the tiny town of Piedmont, Arizona. While traveling through space, the satellite picks up an extraterrestrial organism that kills humans quickly by causing their blood to clot. Published in an era when we were just discovering and beginning to understand how the building blocks of life (like water and organic molecules) may exist and function in space, "The Andromeda Strain" foreshadows the work that researchers are engaged in today.

Related: The Best Space Books and Sci-Fi for 2020

The late Michael Crichton's iconic book "The Andromeda Strain" from 1969 gets a 21st-century sequel in Daniel Wilson's sequel "The Andromeda Evolution," which takes the story back into space.View Deal

Since Crichton's death in 2008, his estate managers have published several of his novels. Their latest idea was to publish a sequel to "The Andromeda Strain" to celebrate its 50th anniversary. For the sequel, they approached Daniel H. Wilson, a roboticist and a best-selling author of the thriller "Robopocalypse" (Doubleday, 2011), which illustrates what happens when a self-aware artificial intelligence infects internet-connected devices. Wilson was greatly inspired by Crichton in his childhood.

"When I was a kid, I was huge into science fiction, and of course Crichton ended up being someone that I read repeatedly," Wilson told Space.com. "I read one book and I went and found every other book of his I could get my hands on."

"The Andromeda Strain" was one of Wilson's two favorite Crichton novels while he was growing up. The other one was "Sphere" (Knopf, 1987) — which also deals with extraterrestrial life. "I love space. I love scientists solving these problems, and just all the technology, the really sophisticated stuff," Wilson said.

When Wilson heard that the estate managers wanted him to move forward with a "Strain" sequel, "It was a dream come true," Wilson said. To him, space seemed a natural place to set the sequel because much of "Andromeda" was set underground — the idea of opposites really appealed to him, he said.

Robonaut 2 and a hexagonal storm

Wilson said he did his best to honor "the world of 'The Andromeda Strain,'" while adding in the numerous space-exploration missions that have taken place since the novel was published.

The original novel hit bookstores in the same year in which Apollo 11 landed the first humans on the moon. At that time, we were just beginning to explore the solar system.

While Mars, Venus and the moon were popular destinations for robotic vehicles in the 1960s, it wasn't until 1973 that Pioneer 10 flew past Jupiter and Saturn. Humans landed a robotic craft on Mars even later, in the late 1970s, which saw the Voyager 1 and 2 spacecraft fly past Jupiter, Saturn, Uranus and Neptune in a "grand tour" of the solar system. In more recent years, we've also sent landers and rovers to Mars, spacecraft to orbit Jupiter and Saturn, and we've even flown craft out past Pluto, among other milestones.

While space exploration may have changed in recent years, people are pretty much the same, Wilson said. Just as in "Strain," "Evolution" is about "people finding something that they can't understand," he said. "They're driven by curiosity, and [I write about] how our big brains can get us into a lot of trouble and get back out — ideally."

In this sequel, Wilson also touched upon stereotypes within his own heritage, as he is a member of the Cherokee nation, which is indigenous to North America. In his writing, he rejects the stereotypical colonial notion that depicts Native Americans and indigenous peoples as primitive. He explained that he wanted to show the indigenous people of the Amazon working together with Western scientists to solve problems.

Without getting into too many spoilers, "Evolution" follows the aftermath of the Chinese Tiangong-1 space station (which was real) breaking apart over the general region of the Amazon. Wilson took the real-life 2018 space station breakup and fictionalized it somewhat, with pieces crashing into the jungle and causing problems.

Wilson was able to connect with the team at the NASA Johnson Space Center that works on Robonaut 2, the test robot that is meant to do simple tasks (like flipping a switch) on the International Space Station.

Wilson spent a day at Johnson exploring the space station mockup and talking to Robonaut 2 scientists, bringing two of his three children along to share in the experience. Both Robonaut 2 and the space station are featured prominently in the book as scientists study an extraterrestrial organism in microgravity.

With a laugh, Wilson added that readers should be on the lookout for a reference to the hexagonal storm at Saturn, which the real-life NASA Cassini mission observed up close. "I don't want to give away anything [in the novel], but it [the storm] is weird as hell," he said.

Wilson added that he was grateful to the engineers and scientists at NASA who supported his work, and who reassured him that even if he slightly deviates from reality every so often, his work will still be appreciated "because they don't want to read another technical paper," he said. Some of the engineers and scientists actually read Wilson's work. That extra attention prompted him to make one major revision that had to do with orbital mechanics because, as a Robonaut 2 engineer explained to him, "You can't wave your hands at gravity."

Wilson's book was released Nov. 12 and is available at all major booksellers,  including Amazon.