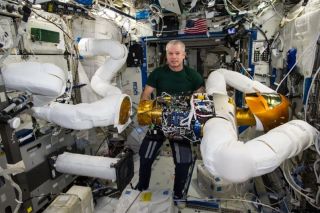 In 2010, astronauts on the International Space Station added legs to their robotic crewmember, Robonaut 2.
(Image: © NASA)

A litany of problems has kept the robot offline since it was upgraded with legs in 2014, according to a report by IEEE Spectrum. After years of troubleshooting, NASA diagnosed the issue and is bringing Robonaut back from the International Space Station for upgrades and repairs.

NASA's Johnson Space Center produced the first Robonaut  in 2000, which was only tested on Earth; the newer model, Robonaut 2, joined the space station crew in February 2011. It was intended to work alongside the astronauts, taking care of some of the crew's time-consuming chores, according to IEEE Spectrum. Robonaut 2 performed well until 2014, when NASA decided to outfit the robot with a pair of legs to increase its mobility. The extra appendages could grab onto anchor points in the space station, freeing the robot's hands for useful tasks.

However, "Robonaut was not designed at all to be serviceable by astronauts," Julia Badger, Robonaut project manager at NASA's Johnson Space Center, told IEEE Spectrum. The installation took twice as long as the 20 hours NASA had expected, and stretched from July 16 to Aug. 28, 2014. [Real-Life 'Replicants': 6 Humanoid Robots Used for Space Exploration]

Robonaut began experiencing problems almost immediately. NASA's ground team couldn't see any telemetry data when the robot was powered on the following day. And the first time the motor was powered up since the upgrade, the legs didn't move, IEEE Spectrum reported. Thus began a series of errors spanning Robonaut's sensors, communication systems and processors.

Robonaut's performance continued to deteriorate as astronauts and technicians pored over the robot. "By 2016, it seems as though Robonaut was being taken apart and analyzed almost piece by piece," according to the IEEE Spectrum report. What's more, the robot aboard the space station was an earlier model than the five Robonauts at the Johnson Space Center, which added a layer of difficulty to the troubleshooting.

Eventually, NASA discovered a fault in Robonaut's electrical grounding: The robot was missing a connection from its computer chassis to the ground, IEEE Spectrum reported. This meant that electricity wasn't flowing properly through the robot. Some of its components may have been receiving no current, while others might have been overloaded with electricity.

"Errors in properly grounding circuits can lead to really strange symptoms that initially appear unrelated to the root cause," David Wettergreen, a roboticist at Carnegie Mellon University in Pittsburgh, told IEEE Spectrum. "It can take a long time to debug because the problem is not easily reproducible and may not occur often, or even in the same way every time," said Wettergreen, who specializes in autonomous robots for planetary exploration. [In Photos: Robonaut 2, NASA's Robot Butler for Astronauts]

After astronauts attempted repairs last August, NASA decided to return Robonaut to Earth. The robot will hitch a ride back to terra firma on the return flight of an upcoming resupply mission, according to IEEE Spectrum. Depending on the extent of Robonaut's damage, NASA will either repair and upgrade the robot or swap it out for one of the newer models at Johnson Space Center. Given Robonaut's size, NASA is uncertain when there will be enough room to send it skyward again.

Badger, manager of the Robonaut project, told IEEE Spectrum that she is optimistic the robot will soon return to the space station to continue its mission. "We're bringing it home, repairing it, and in the near future after that, we're hoping to fly it up there again to proceed with our original goals of advancing new technology," she said.