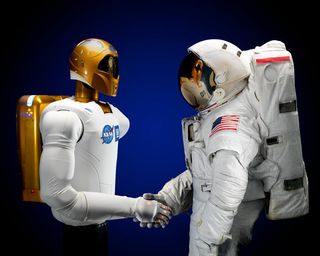 Robonaut 2, a dexterous, humanoid astronaut helper, flew to the International Space Station aboard space shuttle Discovery on the STS-133 mission. Although initially only used in operational tests, upgrades could eventually allow the robot to realize its true purpose — helping spacewalking astronauts with tasks outside the space station.

NASA astronaut Steve Swanson poses with the robot Robonaut 2 on the International Space Station after completing an upgrade that gave the robot legs.

Robonaut on the International Space Station.

The handlers of the space agency robot had some fun with it on the run up to the Super Bowl 2017. Watch it make some of the ref’s signals.

First View From Space By Robonaut 2

The first view recorded by the camera eyes of Robonaut 2, a robot helper on the International Space Station, during the first tests of the droid on Aug. 22, 2011 during the Expedition 28 mission.

Robonaut 2 Is Alive In Space

Space station astronaut Mike Fossum of NASA talks to Mission Control after working on the Robonaut 2 helper droid on the International Space Station on Aug. 22, 2011, during the robot's first tests.

NASA's Robonaut 2 strikes a post atop its new wheeled base, Centaur 2, at the Johnson Space Center Planetary Analog Test Site in Houston. The Centaur base builds off of lessons learned through the Space Exploration Vehicle, a rover for astronauts, and could allow the dexterous humanoid robot to help with the future exploration of distant planetary surfaces.

NASA's Robonaut 2 flexes its newly built legs in this still from this video demonstration of the robot's capabilities released Dec. 9, 2013. Now watch Robonaut 2 dance a waltz to "Blue Danube".

Astronaut Paolo Nespoli writes, "Robonaut in its crate gets moved from PMM to the Lab. We’ll unpack it later, unless it takes over the ISS earlier!"