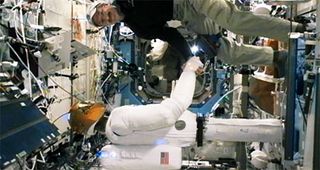 NASA robot Robonaut 2 shakes the hand of astronaut Daniel Burbank on Feb. 15, 2012, during the Expedition 30 mission. Robonaut 2 is the first humanoid robot ever to fly in space.
(Image: © NASA)

A NASA robot built to ease the daily lives of astronauts in space greeted its human commander with a hearty handshake Wednesday (Feb. 15), along with a silent message: "Hello, World."

The historic handshake between man and machine —a first in space —was shared between NASA's humanoid robot, named Robonaut 2, and American astronaut Daniel Burbank on the International Space Station.

"For the record, it was a firm handshake,” Burbank said in a NASA video marking the event. "Very nice… nice job on the programming and all the engineering. Quite an impressive robot.”

After the handshake, Robonaut 2 used its dexterous hands to say "Hello, world" in American sign language. The message is a traditional programming phrase and was also the first greeting sent out over Robonaut 2's Twitter account @AstroRobonaut, NASA officials said in a statement.

Robonaut 2, or R2 as it is known at NASA, is a $2.5 million droid designed to be an autonomous assistant to help astronauts with complex chores to keep the space station running properly. The robot was developed through a NASA partnership with car manufacturer General Motors and is the first humanoid robot ever to fly in space. [Photos: Robonaut 2, Robot Butler for Astronauts]

"Today was a major step forward in R2's development," said Ron Diftler, Robonaut 2 project manager, in a statement. "The crew and the robot are working extremely well together and we’re looking forward to all the opportunities that will develop from this collaboration."

NASA delivered Robonaut 2 to the space station in February 2011 during the last flight of the space shuttle Discovery. The robot consists of a torso, arms and camera-equipped head. It is 3 feet, 4 inches (1.01 meters) tall and weighs about 330 pounds (150 kilograms).

Station astronauts powered up Robonaut 2 in August and have been testing it ever since. NASA also has a twin of the robot on Earth for use in field trials of a wheeled mobile base that allows the automaton to drive around different terrains.

Robonaut 2 has been a social media hit for NASA. The robot's Twitter account, which is controlled by flesh-and-blood engineers despite its first-robot tone, has 52,786 followers and is gaining more every day.

"Did you catch that? I don't have a voice, but I sent you a message -- Hello world ... in sign language!" read one Robonaut 2 post on Twitter today. "What a day! I passed my tests with flying colors!!!"

NASA station officials said the next major tests for Robonaut 2 in space will be to check the robot's onboard cameras. The head-mounted cameras allow Robonaut 2's controllers to see what the robot sees and are also used by the robot itself to verify its work, NASA officials said.

Once Robonaut 2 passes its camera vision tests, NASA engineers plan to test the robot's ability to flip switches, push buttons and perform other dexterity tests on a taskboard that mimics the controls used on the International Space Station.