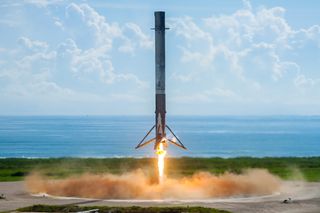 Some of the spaceflight community's biggest movers, shakers and disruptors will gather in Seattle next week to discuss humanity's next giant leaps.

The Economist magazine is hosting its inaugural space summit, called "A New Space Age," on Thursday (Nov. 9) at the Museum of Flight, just outside Seattle.

"The ambition is to bring together a diverse group that will teach us, and itself, about quite how many different things there are going on in space," The Economist Briefings Editor Oliver Morton told Space.com.

And there is indeed a lot going on. For example, Morton cited the reusable-rocket successes of spaceflight companies SpaceX and Blue Origin, as well as the development of increasingly capable small and inexpensive satellites by private outfits such as Spire and Planet.

"It's quite a remarkable time," he said.

Other exciting advances appear ready to crest the horizon as well. On-orbit manufacturing and assembly are no longer pipe dreams, for instance. California-based Made In Space already operates a commercial 3D printer aboard the International Space Station, and the company is developing a robotic-arm–equipped system called Archinaut that's designed to build big structures on orbit.

Breakthroughs could also soon come via the combination of advanced machine learning and the profusion of data from small, Earth-observing satellites, Morton said.

"The world being reimagined as a huge database for training machine learning on — it's going to teach us a great deal about both the natural environment and the human world," he said. "That's really interesting, and it just wasn't conceivable five or 10 years ago."

Editor's note: Space.com is a media partner for "A New Space Age," and senior writer Mike Wall will be attending. So, stay tuned for stories coming out of the conference.