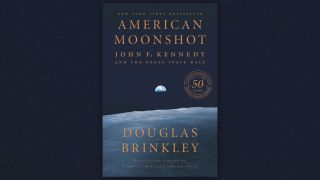 Space fans: If you're in New York City on Friday, June 14, get ready for the 50th anniversary of Apollo at the Intrepid Sea, Air & Space Museum with historian and author Douglas Brinkley.

The floating museum will host a discussion with Brinkley about his bestselling new book, "American Moonshot: John F. Kennedy and the Great Space Race" (Harper, 2019), as well as a book sale and signing.

And while you're there, check out Intrepid's new installation on Apollo, which opened May 1, called "Apollo 11: Media, the Moon and Beyond." The installation, in the museum's Space Shuttle Pavilion by the shuttle Enterprise, features an ascending tower of vintage televisions. According to a statement from the museum, those televisions show the reactions of people around the globe to the milestone event.

The event is one of many the museum is hosting in the run-up to the moon landing anniversary on July 20, including free movie screenings on the flight deck of the documentary "Apollo 11" and film "First Man"; a pop-up installation about the iconic Earthrise photograph; a planetarium show about the moon missions; and an improv comedy event with Upright Citizens Brigade exploring the historical challenge of making it to the moon. See the full list of events here.

"As president of the museum, nothing makes me more proud than the incredible work we do to enrich lives, educate our youth and inspire our next generation of thinkers and doers, all while celebrating momentous times in our history. One of those moments is, of course, the lunar landing,” Susan Marenoff-Zausner, president of Intrepid Sea, Air & Space Museum, said in a statement. "Intrepid, in its days of service, played an important role in space exploration serving as a recovery vessel for the Gemini and Mercury missions, the precursors to Apollo. We pride ourselves in providing programming and opportunities to connect these moments of the past to possibilities of tomorrow."