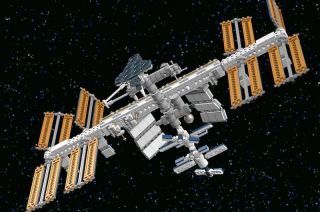 The International Space Station has won the honor of becoming an official toy in the Lego universe.

The orbiting outpost topped a fan vote of more than 22,000 Lego enthusiasts to be the Danish toy company's next real-life spacecraft to be made into a toy brick model. The space station received more than 45 percent of the votes cast — 10,438 votes to be exact — in the Lego Ideas 10-Year Anniversary poll, held May 20 through June 4 on the company's website.

"An incredible achievement in [the] short fan vote period. It continues to show the huge desire for space and space exploration among the Lego Ideas community," wrote Hasan Jensen, a Lego Ideas team member, in a blog post announcing the winner on Tuesday (June 4).

The International Space Station (ISS) model, as designed by Christoph Ruge of Germany, was up against three other set ideas that had qualified and then been passed over by the Lego production review process. Lego held the fan vote to mark the 10th anniversary of its Lego Ideas website, which invites enthusiasts to propose new sets. Projects that reach 10,000 supporters are reviewed by Lego for possible production and sale.

"It's been a wildly busy last few weeks with over 22,000 Lego Ideas members voting for their favorite model among these four past 10K Club submissions that had been selected to be a part of this Extraordinary 10-Year Anniversary Review and Fan Vote," wrote Jensen.

The space station's competition included a scale version of Nathan Sawaya's "Art of The Brick" sculpture "Yellow," a set of miniature Sega arcade machines and a model of Disney's animated alien Stitch. The Stitch set placed second in the poll with 5,739 votes, followed by the Sega arcade machines (3,788 votes) and Small Yellow (2,924 votes).

"Big congratulations to XCLD [Ruge's Lego Ideas username] whose design has achieved an unprecendeted [sic] 45.6% of all the votes cast," said Jensen.

"I am speachless! [sic] Thanks everyone for your overwhelming support!! This is a time for celebration!!" Ruge exclaimed on Twitter.

Ruge first submitted his model of the space station to Lego ideas in 2014. After it was rejected by Lego's review team a year later, he reworked his design, scaling it down to match the space shuttle included in the Lego Ideas "Women of NASA" set, which was released in 2017.

Ruge's smaller space station qualified for review in 2018. But again, Lego set it aside in February (2019). Now, the fan vote has given Ruge's space station model the "go" for production.

"XCLD's International Space Station design will now move into the official product development phase, in the same way as it works during regular reviews. As always, we won't be able to reveal any details, including price, design and more, until we get closer to the set's launch in 2020," explained Jensen.

Assembly of the real space station began in 1998 with the launch and connection of the first Russian and U.S. components in orbit. The first expedition crew moved on board in 2000.

Releasing the Lego International Space Station set in 2020 will coincide with the 20th anniversary year of a continuous human presence aboard the orbiting laboratory. It will also be the third time that Lego has produced an ISS, but only the second set to be sold to the public.

In 2003, Lego partnered with Discovery Channel to market a 162-brick set of the space station in its still-under-construction configuration. Eight years later, under an educational partnership between Lego and NASA, Expedition 29 flight engineer Satoshi Furukawa of the Japanese space agency assembled a Lego-designed model of the complete orbiting laboratory on board the real ISS. But that set had one major limitation: it could only be built in space. On Earth, the model would collapse under the normal pull of gravity.