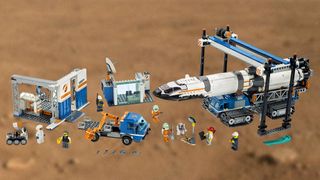 As NASA pushes to land humans on the moon and Mars in the coming years, the Lego Group has seven new space-themed building sets inspired the agency's Red Planet plans.

These sets will be released on Saturday (June 1) elsewhere in the world and on June 23 in North America, and are geared to children who are at least 5 years old.

(Separately, Lego has unveiled another set to commemorate the 50th anniversary of the first human moon landing on July 20, 1969.)

Here's a list of the seven Mars-inspired space sets that Lego has to offer:

This mission features a toy space shuttle with a cockpit — the perfect spot to place your minifigures. It also includes a satellite with solar panels that open up, to power the spacecraft. You can store the satellite in the shuttle during launch to space. Also included is a spacesuit (complete with gold visor), an astronaut minifigure and a wrench so that the astronaut can do repairs in orbit.

Astronauts on the Red Planet will depend on rovers to do geology and to travel long distances. Included with this rover is a grappling arm (to pick up those important samples), all-terrain wheels and a solar- panel generator to harvest power from the sun. Two astronaut minifigures take the ultimate road trip, equipped with geodes (a special rock formation hiding crystals inside), a laptop, a video camera, a remote control, a rock drill and a helmet with a visor.

If you always wanted to fly on Mars, this set will let you soar to new heights. This combination rover, space shuttle and drone set allows young builders to explore the Red Planet by land and by air.

Two astronaut minifigures have a spot to sit inside the space shuttle, which has room inside to store the drone. The rover includes a grappling arm, a laser and tilting solar panels. Then there are two aircraft: a storage drone with a compartment that opens and a helidrone with a scanner and helicopter-like spinning rotor blade. Numerous astronaut accessories — and a Mars scenery piece — are also available.

Get ready for moon missions with this modular space station. There are three modules that you can move around in whatever configuration your astronauts need. The station includes an airlock, a kitchen, a living module where astronauts can sleep and train, and a lab module for scientific experiments. Also included in the kit is a detachable shuttle with a cockpit and a storage space, four minifigures, a robot and several astronaut accessories.

Get ready to launch to Mars! This rocket has all the parts needed for an amazing mission to the Red Planet. You can set the rocket atop a launchpad, which is easily connectable to a separate launch control center using a monorail. The launch control facility includes a detachable window section, and the ability to fold it out or set a countdown. This set comes with many accessories, including a robot, a space telescope, astronaut minifigures, ground personnel, and a tile with a secret symbol.

This comprehensive set shows many of the elements needed to make a Mars launch work. The launch rocket sits atop a special crawler to bring it to the launch pad. A launch control center lets ground personnel stay in touch with the astronauts as they count down to liftoff. Some of the many other elements include a rover transport truck, a rover (including an arm and a drill), and several minifigures to crew the launch and support the mission on the ground.

Space is a group effort, and this set shows some of the many jobs necessary to explore space and support astronauts. Minifigures can operate the equipment, which includes items such as a g-force training machine, a treadmill or a robot stand. Some of the many jobs portrayed include a personal trainer, a drone engineer, a rocket engineer, a robot and (perhaps in nod to the 2015 blockbuster "The Martian") a botanist.