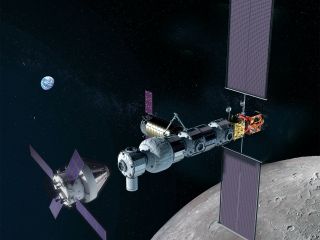 NASA's moon-orbiting space station will be lean and mean, especially at first.

The deep-space outpost, known as the Gateway, is a key element of NASA's Artemis program, which plans to put astronauts down near the moon's south pole by 2024. For example, lunar landers, both crewed and uncrewed, will depart from the Gateway, and astronauts will regroup there after wrapping up their surface sorties, NASA officials have said.

(These visitors will arrive at Gateway aboard NASA's Orion crew capsule, which will launch atop the agency's Space Launch System megarocket, or SLS. Both Orion and SLS remain under development; the duo is scheduled to fly together for the first time in June 2020, on an uncrewed test mission known as Artemis 1.)

The space agency had been targeting 2028 for the first post-Apollo crewed lunar landing. But in March, Vice President Mike Pence announced a newly aggressive timeline, pushing the moon shot up four years.

To make sure Gateway is ready to go in 2024, NASA will go first with a scaled-down, bare-bones version consisting solely of a Power and Propulsion Element (PPE), scheduled to launch in 2022, and a miniature "utilization module." This first incarnation of Gateway will be able to support two-person missions to the lunar surface, NASA officials have said.

But the agency will beef up Gateway for Artemis' "Phase 2," which aims to establish a long-term, sustainable human presence on and around Earth's nearest neighbor. ("Phase 1" culminates with the 2024 landing.) Success in Phase 2 will help NASA and its international partners prepare for the ultimate human-spaceflight destination — Mars.

"The smaller Gateway is really just geared toward getting to the surface of the moon, so it has minimal life-support capability, it has minimal docking ports," Bill Gerstenmaier, associate administrator for NASA’s Human Exploration and Operations Mission Directorate at the agency's headquarters in Washington, D.C., said during a teleconference with reporters Thursday (May 23).

"We really need a little bit more space, a little more volume," he added. "So, we'll probably want some additional docking ports for other things, so we can have potentially multiple lunar landers dock there."

More ports would also come in handy if the Phase 2 Gateway serves as a spacecraft-refueling station, which is a possibility, Gerstenmaier said. Additional space, on both the ministation's interior and exterior, would enable more research to take place as well, he added.

A bigger Gateway would offer more comfortable crew accommodations. And the larger station would enable more opportunities for NASA's international partners to participate, Gerstenmaier said. This latter consideration is important for the agency, which has long stressed that the difficult and expensive quest to put boots on Mars will be a collaborative effort.

And that quest colors everything about Artemis and the Gateway. For example, even in its finished form, the orbiting outpost will be decidedly runty compared to the $100 billion behemoth currently circling Earth, which features more living space than a six-bedroom house.

"To be clear: We are not building the International Space Station around the moon," NASA Administrator Jim Bridenstine said Thursday during a webcast address at the Florida Institute of Technology.

"That is not our goal here. We as a nation do not want to get bogged down, with all of our resources going to the moon," he added. "Our goal is ultimately to move on to Mars and not get stuck on the surface of the moon."