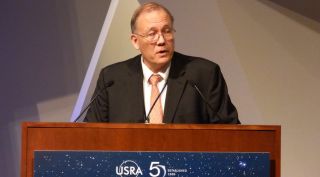 Scott Pace executive secretary of the National Space Council, described the administration's new approach to a human return to the moon as a "strategy of speed leading towards sustainability" in an April 23 speech.
(Image: © Jeff Foust/SpaceNews)

WASHINGTON — As NASA works to develop a plan for an accelerated human return to the moon, a top White House official emphasized the need for long-term sustainability that will require both a Gateway and a lunar base.

Speaking at an event at the National Academies here April 23 marking the 50th anniversary of the Universities Space Research Association, Scott Pace, executive secretary of the National Space Council, said the new effort to bring forward a human lunar landing is a "strategy of speed leading towards sustainability" that will make this effort different from the Apollo missions of a half-century ago.

Pace, speaking four weeks after Vice President Mike Pence announced a new goal of a human lunar landing in the next five years, said the accelerated timeline is intended to provide a sense of urgency to focus the agency on that goal. "The purpose of that speed, part of the reason why the vice president made that announcement, was to provide focus and priority," he said.

"It's very, very tempting, if you have a far distant goal, to analyze lots and lots of different options and put off making tough decisions about priorities. There's a clarifying nature to having a near-term, stressing goal, where you think about what's in fact really important," he continued. That focus, he said, can help create a "spacefaring organization that can journey beyond low Earth orbit."

NASA has not outlined in detail yet how it will accomplish that new goal, or the budget required. An amendment to the agency's fiscal year 2020 is under development, and may be delivered to Congress as soon as next week.

NASA Administrator Jim Bridenstine, speaking at the 35th Space Symposium in Colorado Springs April 9, also discussed what he described as a two-phase approach to the new exploration plan that emphasized speed first, followed by sustainability. That approach would make use of the Space Launch System and Orion spacecraft, along with lunar landers yet to be developed and a lunar Gateway that, at least initially, might involve only a fraction of the elements previously proposed for the human-tended facility in lunar orbit.

Pace confirmed in his presentation that the lunar Gateway would be relatively small in its initial version. "I would expect to see a very minimal Gateway initially, in terms of supporting what we need for 2024. I see a larger, more capable Gateway building out as we go towards reusability."

He said the Gateway's value may ultimately be as a "fuel depot," allowing for lunar landers, or at least some portions of them, to be reused. "Instead of abandoning expensive vehicles after a single trip, we should contemplate creating a fuel depot to enable repeated visits to the moon and pave the way to Mars," he said, "and that's exactly what NASA has proposed with the lunar Gateway."

A "minimal" Gateway has raised concerns among international partners about what roles, if any, they'll have in that initial sprint to the moon. Asked about that, Pace said he's met with international partners on the issue. "In the short term the focus is building the organization that's capable of going back," he said. As the focus shifts to long-term sustainability, he said, there will be opportunities for partners to provide Gateway modules and lunar landers.

That emphasis on sustainability extends to the lunar surface. "We need a lunar field station to conduct exploration of the lunar surface and enable multiple sites from that station," he said. That drove the decision to make the south pole of the moon the site for that initial lunar landing, which Pace envisions being built up over time, eventually comprising multiple modules with pressurized rovers and nuclear fission reactors for power. "A lunar south pole station can be an access point to the rest of the lunar surface."

One of the key factors for that interest in the south pole is the potential access to deposits of water ice that can be used for life support and as propellant. He cautioned, though, that the nature and accessibility of that ice is uncertain, requiring research to determine if it's feasible to use any ice that exists there.

The base can also support other research there. "We're going to be going for lots of reasons, of which science is but one," he said, "but on the other hand, we want to make sure what science we do there is, in fact, driven by community assessments."

The emphasis on lunar resources prompted an audience question on why NASA last year cancelled Resource Prospector, an agency mission that had been under development to test the feasibility of extracting water ice.

Pace said its cancellation was a "poorly communicated" decision by NASA. The agency leadership, he said, understands the value of robotic precursor missions to help understand the nature and accessibility of water ice at the poles, which can also support "opportunistic science" that might not have been done otherwise.