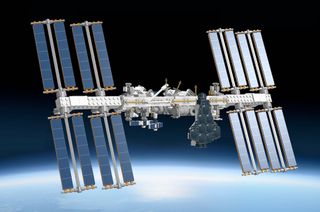 Lego is giving fans the chance to vote for the International Space Station to become a toy brick set.
(Image: © Lego Ideas/Christoph Ruge)

Lego is giving the International Space Station a third chance at becoming one of its official toy sets.

German Lego fan Christoph Ruge's model of the space station twice qualified for a product review through the Lego Ideas website and was twice turned down. Now, the Danish toy company is letting the public decide if Ruge's space station is put into production.

"We've dug into the Lego Ideas archive ... to rediscover product ideas with the potential to become an official Lego Ideas set launching in 2020," Hasan Jensen, a member of the Lego Ideas team at the company's headquarters in Denmark, announced on Monday (May 20). "We re-reviewed every single product idea that has reached the 10,000 supporter milestone but was not approved."

Related: How to Spot the International Space Station with New NASA Tool

The review, inspired by Lego Ideas' 10th anniversary, resulted in four finalists, including the International Space Station (ISS), a model of Disney's animated alien Stitch, a set of miniature Sega arcade machines and a smaller version of Nathan Sawaya's "Art of The Brick" sculpture "Yellow."

"What we now need is your help in determining which one of these four finalists should become an official Lego Ideas set," said Jensen.

Lego on Monday began accepting votes for the four models. The polling runs through June 4. The product idea that gets the most votes by the end of the voting period will be turned into an official Lego Ideas set.

"Surprising news: My [second] Lego ISS gets a second chance! This time it might become an official set after all! Vote for it and tell everyone about it!!" wrote Ruge on Facebook.

Ruge, who goes by the username "XCLD" on the Lego Ideas website, first submitted his model of the space station in 2014. After it was rejected by Lego's review team a year later, he reworked his design, reducing its size to match the scale the space shuttle included in the Lego Ideas' set "Women of NASA," which was released in November 2017.

"This time it was a smaller scale, so the challenge was to keep as many details as possible and to catch the essence of the station and the play value," said Ruge in an interview with LEGO. "As with the larger one the most difficult part was the overall stability of the structure. It is very fragile, which is not a big deal in a zero gravity environment. But it is down here on Earth!"

Ruge's space station model qualified for its second review in 2018.

"It took five months to gather the first 5,000 votes and another three to complete the deal," said Ruge. "In the end there were a lot of fans watching the crossing of the finish line. That was flattering and fun to see."

"My interest in the International Space Station came a long way," said Ruge. "I was amazed to see how ingenious it was designed. Especially the totally modular concept is like playing with LEGO bricks in space. They are indeed rearranging the modules of the station up there every now and then — and that's what you can do with the model down here as well!"

If Ruge's model wins the fan vote, it will become the third time that Lego has produced an ISS set, but only the second to be sold to the public. In 2003, Lego partnered with Discovery Channel to market a 162 toy brick set of the station in its still-under-construction configuration.

Eight years later, under an educational partnership between Lego and NASA, Expedition 29 flight engineer Satoshi Furukawa of JAXA assembled a Lego-designed model of the complete orbiting laboratory on board the real ISS. That set had one major limitation: it could only be built in space. On Earth, the model would collapse under the normal pull of gravity.