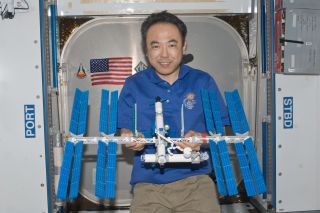 Japanese astronaut Satoshi Furukawa poses with the LEGO model of the International Space Station that he built on board the real space station.
(Image: © NASA)

It took more than 200 astronauts from 12 countries more than a dozen years to build the International Space Station (ISS). Satoshi Furukawa, an astronaut from Japan, matched that feat in just about two hours — and he did it all while aboard the orbiting outpost itself.

It helped that his space station was made out of LEGO.

"It was a great opportunity for me to have built the LEGO space station," Furukawa, a Japan Aerospace Exploration Agency (JAXA) flight engineer, told collectSPACE.com in an interview after he returned to Earth. "I enjoyed building it."

"The ISS was put together in space, piece by piece," said Furukawa. "It's very similar to how you put together LEGO bricks on Earth."

The approximately two-foot (0.6-meter) long model, which replicated the nearly 360-foot (110-meter) space station was more than just a toy. Accompanied by other building brick sets that were launched last year, the LEGO space station was part of an educational collaboration between the Danish toy company and NASA.

After piecing together the toy brick-built station, Furukawa used it as a demonstration for a series of recorded videos aimed at engaging and educating children about living and working in space.

"Kids like LEGO and when they see LEGO floating in space, I'm sure they are excited," Furukawa said. "Well, I hope this experience inspires them to make greater efforts to study science and technology." [Gallery: LEGO ISS on Real ISS]

Not that the activity was all work and no play.

"He really enjoyed doing that and he kind of became 'the LEGO guy,'" NASA astronaut Michael Fossum said of his crewmate. Fossum was in command of the real station when Furukawa built the LEGO version.

Although building the LEGO space station was an activity aimed at students, it was not all child's play.

"There was actually some learning curve to that, believe it or not," Fossum told collectSPACE.com during a post-mission interview. "LEGOs are an example of something that is a lot of fun on the ground but it can be very frustrating when you have a lot of loose floating pieces."

To keep the bricks contained and to protect against some potentially serious dangers, Furukawa pieced together the model inside a glovebox — a sealed container with gloves built into its sides to allow the contents to be manipulated. Station crew members use a more complex glovebox to conduct science experiments with hazardous materials. [Video: Lego Man Flies to Near-Space]

"A lot of the work dealing with the small pieces had to be done in an enclosure, like a simple payload glovebox," Fossum said. "A simple structural one with plastic sides so you could see inside, but a glovebox so you don't have all of these little pieces getting loose and becoming either lost or potentially getting jammed in equipment or even becoming a flammability hazard."

Fire is usually not one of the warnings that people find on the side of LEGO boxes.

"It's a little hard to comprehend, but there are flammability concerns about the LEGOs," Fossum said.

For Furukawa, he had his hands full just working with the enclosure without having to worry about it combusting.

"The challenging part was using the thick rubber gloves in the containment system because it made me clumsy in building the LEGO space station," he said. "I needed to use the system to put many small pieces of LEGO under control in microgravity."

The real space station was declared "assembly complete" on May 29, 2011, during the penultimate mission of the space shuttle program. The same mission delivered the LEGO space station.

Furukawa, making his first spaceflight, arrived aboard the station a week later. Using a step-by-step building guide, he completed assembly of the LEGO station on Sept. 27.

Made up of hundreds of bricks, the model was launched in partially-preassembled "chunks" to help make up for the difficulties working with very small pieces in microgravity. The space station could not be launched fully-assembled, because like the real orbiting outpost, it could only be built in space.

"It's a solid model but I believe it can't bear its own weight under gravity," Furukawa said.

The LEGO station's time fully assembled was short lived however. Due to the flammability hazards, the toy bricks could only be exposed to the open cabin air for two hours.

Just like parents telling their kids to put away their toys when they are done playing, Mission Control instructed Furukawa to take the model apart and stow it after his educational videos were recorded.

"Per the ground's instruction, I needed to put it away," Furukawa said. "It is stowed in a drawer in the [European Space Agency's] Columbus module right now."

In addition to the ISS, Furukawa also built LEGO models of lunar exploration and Mars rovers, the Hubble Space Telescope and a communications and global positioning (GPS) satellite. He also constructed tools to demonstrate science principles, including a balance and fishing rod.

Visit collectSPACE.com to see a time lapse video of the LEGO space station being built and for more photographs of the model aboard the real International Space Station.