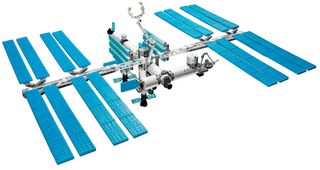 Astronauts flying on board space shuttle Endeavour's final mission declared assembly of the International Space Station complete this past week, but thanks to a special delivery being left at the orbiting laboratory, the station crew's assembly work has just begun.

Packed on Endeavour for the trip to space and transferred to the space station during the shuttle's docked stay were 30 unassembled LEGO toy models — including a space shuttle and a custom-designed replica of the International Space Station (ISS) itself.

"On behalf of the STS-134 crew and Expedition [28] crew, space station assembly is complete," said Endeavour's commander Mark Kelly on Friday after two spacewalking astronauts added the a robotic arm extension boom to the exterior of the station.

Earlier during the STS-134 mission — the penultimate for the 30-year space shuttle program — Endeavour added to the station a new spare parts platform and the Alpha Magnetic Spectrometer, a $2 billion science experiment examining fundamental issues about matter and the origin and the structure of the universe.

With their station assembly work completed, Endeavour's six astronauts departed the ISS late on Sunday evening, leaving behind the LEGO-version of the orbiting outpost for the station's crew to build. [Gallery: Building the International Space Station]

The LEGO models, including the space station, will be used in eight educational activities that will be conducted by ISS crew members and made available to educators across the United States to utilize in classroom curricula.

The LEGO Bricks in Space project is part of an outreach and educational program developed under the partnership between NASA and the LEGO Group to inspire children to explore science, technology, engineering, and math.

"Education outreach is a big part of what we do at NASA," station flight engineer Ron Garan told collectSPACE from orbit Thursday. "Just the fact that we are flying in space and the amazing things we are doing in space are very inspiring. I know when I was a kid I was inspired by the space program."

"We have lots of different methods [to do] educational outreach, [LEGO is] one of them. I think that's one of the reasons we have the space station, to inspire the next generation," said Garan.

On board the ISS, Garan and his fellow astronauts will explore the effects of microgravity on simple machines by building models, conducting experiments, and sharing those results with students and teachers back on Earth through video and crew commentary. Each activity will have a teacher's guide and student worksheet so that the same activities can be conducted by students on Earth and the results compared and contrasted.

The LEGO Bricks in Space project encompasses models from the LEGO CITY Space Port line available in stores now with corresponding activities such as a LEGO tour of the space shuttle and International Space Station. The 30 models also include tools, like a Trundle wheel used as a measuring device, and space-only sets such as vignettes showing scenes inside the space station's modules.

Continue reading at collectSPACE.com about how astronauts train to build LEGOs in space and why the LEGO International Space Station can be found only in space.