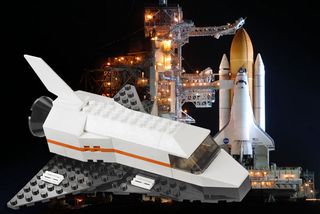 Whenthe space shuttle Discovery lifts off on its final mission, it will have asmall LEGO version of itself onboard to help launch a new partnership betweenthe Denmark-based toy company and NASA.

The7-inch long LEGO shuttle, which was assembledfrom about 60 of the iconic toy pieces, gives new meaning to the term"flying brick" as popularly used to describe the real shuttle giventhat it returns to Earth as a very heavy unpowered glider.

Accordingto NASA, the snap-together shuttle may make a brief appearance in space during Discovery's STS-133 mission, scheduled tolaunch today (Nov. 5) at 3:04 p.m. EDT (1904 GMT), and will then be broughtback to Earth for use by LEGO in educational activities.

"Weare going to use the classroom of space -- the International Space Station -- tohelp the next generation of explorers," explained Leland Melvin, a formerastronaut who last month was appointed as NASA's new associate administratorfor education.

"We'llbe doing different activities, building demonstrations and then demonstrationswith the models once they are built," added Debbie Biggs, an educationspecialist for the ISS National Lab education projects office.

Morethan a dozen LEGO building activities will be flown to the station over thenext two years. The first three will launch with STS-134, shuttle Endeavour'sfinal mission.

"Thefirst set is actually just a workbench, it has pegs to help us control [thebricks]," Biggs told collectSPACE.com. "There is a spaceshuttle set and then there are two kits that are the space station."

TheLEGO shuttle kit that will be aboard STS-134 builds a bigger model than theSTS-133 toy. It features a payload bay that opens and reveals a satellite. Thespace station, which recreates the modules, solar array wings and trusssegments on the real station, will fly as two kits due to its large size.

Theshuttle and station kits are slated to be released for sale to the public in2011 as part of the LEGO City line of toys.

Oncedelivered to the station, astronaut Catherine "Cady" Coleman will bethe first to attempt building the LEGO models, based on special training she isreceiving now on the ground.

"Shehas the first three kits with her right now and her 10-year-old son is trainingher on how to use them," said Biggs with a smile.

"Ifyou are trying to duplicate what a child has done on the ground in a one-Genvironment, it can definitely be done but the question is how long it willtake," said Melvin.

Thisis not the first time that LEGO products have flown in space or have beenthemed around the space program. LEGO has produced space-related sets since1973 and most recently, two astronaut minifigures "hitched a ride"with the Mars rovers Spirit and Opportunity that arrived at the red planet in2004.

Settingthis new partnership apart is the focus on science, technology, engineering andmath, or STEM, disciplines. By using the toys and their construction in space,NASA and LEGO hope to encourage children to take a greater interest inengineering and design principles.

"Weneed something that they can hold in their hand to have an experientialopportunity," said Melvin, explaining why the LEGO brick sets were the"perfect fit" for NASA's STEM educational outreach goals.

"Wedid not have the good fortune to have LEGO bricks on our [STS-129] mission, butI am glad that STS-133 and follow-on STS-134 will have the opportunity to takethese building blocks," said Melvin. "I can't wait to start playingwith my LEGOs."