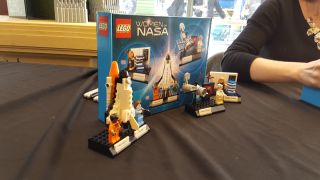 NEW YORK — The line at the Lego Store in Manhattan's Flatiron District reached out the door and around the block on Saturday, Oct. 28, as dozens waited for their chance to pick up the new Women of NASA set four days before its official release.

A curious onlooker, walking her dog past the line, stopped to ask what all the hubbub was about: Why were so many people eager to get into the Lego store at 10 a.m. on a Saturday morning? As the line continued to move, those hopeful to snag their set and have it signed by the set's designer, Maia Weinstock, answered her question.

Fathers were there to buy a set for their daughters, young girls and boys peeked into the windows trying to catch an early glimpse of their new toys, grown women lamented that Legos like this didn't exist when they were kids, and a group of men worried that all of the sets would be gone before they made it through the door. [Women of NASA Lego Set: Q&A with Creator Maia Weinstock]

"Do you know what's so important about this Lego set?" a woman asked her grandson. "A woman designed it, about women. It shows that women can be anything they want, and they always have been."

"I certainly hope all kids can see from this set that women have been a part of the space program for a long time, and will continue to be," Weinstock told Space.com "And I hope particularly for girls to provide a role model for them, so hopefully they can consider NASA as a potential career option or just know that girls can do these kinds of things."

Weinstock, a science writer and editor who currently works as the deputy editor of MIT News at the Massachusetts Institute of Technology, submitted the idea for the Women of NASA set to Lego Ideas in the summer of 2016 and quickly got the 10,000 votes necessary for Lego to consider actually building a fan-submitted project.

She told Space.com earlier this year that she strategically chose these women (which initially included famed mathematician Katherine Johnson, as well) to represent a "diversity of backgrounds, diversity of races, diversity of ages. ... Just to kind of give a sense that women of all ages and backgrounds have contributed to NASA history and have been awesome."

The set includes not only these four women, but also props relevant to their NASA contributions. Hamilton comes with a photo of the code she helped develop that landed astronauts on the moon in 1969. A model of the Hubble Space Telescope accompanies Roman, who is known as the "Mother of Hubble" for her help in planning the telescope. And both Ride and Jemison — the first American woman in space and first African-American woman in space, respectively — stand next to a mini space shuttle.

The Women of NASA Lego set officially went on sale for $25 on November 1.