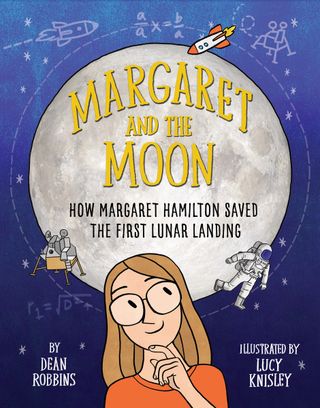 One week in 2014, a 45-year-old snapshot unexpectedly went viral. Taken in 1969, the black-and-white photograph showed a young bespectacled woman, a wide grin on her face as she gingerly balances a tower of manuals, each one thicker than the last. The subject of the picture, as it turned out, was Margaret Hamilton, the pioneering software engineer who helped land the first men on the moon. The massive stack of printouts contained the lines of computer code that got them there.

Dean Robbins, a journalist and children's book writer, stumbled across Hamilton's photograph in his social-media feed. Instantly charmed by her smile, he was even more captivated by her story.

"We associate the 1960s space program with men, both in orbit and behind the scenes, so it was revelatory to find that a woman had played such an important role," Robbins said. "As a children's author, I wondered if Hamilton's career might be an inspiring story for kids." ['Women of NASA' Lego Set: Q&A with Creator Maia Weinstock]

In "Margaret and the Moon: How Margaret Hamilton Saved the First Lunar Landing" (Knopf Books for Young Readers, 2017), a picture book cheerily illustrated by Lucy Knisley, Robbins outlines Hamilton's life, from the backyard of her childhood home, where she posed a million questions about the night sky, to the hallways of NASA, where she led a team from the Massachusetts Institute of Technology to develop the onboard flight software that would change the course of human history.

With scant published information to refer to, Robbins headed straight to the source.

"There wasn't much published information about Hamilton — an all-too-typical phenomenon for accomplished women throughout history," Robbins said. "I'm a longtime journalist, so I put on my reporter's hat, tracked down her email address, and asked if she'd be interested in doing an interview with me for a possible children's book."

"Hamilton is the opposite of a self-promoter, but she has young grandchildren and thought it would be fun to read them a picture book about her career," Robbins said.

Now in her 80s, Hamilton was a gold mine of information. She painted a picture of herself as an inordinately curious child who threw herself into the study of mathematics and used her imagination to solve what she perceived as the injustices of her time.

"Margaret told me wonderful stories that no one had ever reported, starting with her love of problem-solving as a child," Robbins said. "From an early age, she felt the unfairness of a world in which women had fewer opportunities than men, and she resolved to set things right. She made a point of joining the boys' baseball team and even renamed some of the daddy longlegs she found in her yard as 'mommy' longlegs."

Encouraged by her poet-philosopher father, Hamilton aimed for the stars. It was as director of software programming for NASA's Project Apollo, however, that she truly came into her own. With the code she devised, Hamilton took Apollo 8 around the moon, helped Apollo 9 dock two spacecraft and maneuvered Apollo 9 within 9 miles of the lunar surface.

Central to the book is Hamilton's most celebrated accomplishment: setting Apollo 11 in place on July 20, 1969, so Neil Armstrong could make his one small step. The momentous occasion nearly didn't happen, according to Robbins.

"As Apollo 11's lunar module prepared to land on the moon, a miscue caused the guidance computer to overload. That might have led to disaster — either aborting the mission or crashing — but Hamilton's brilliant work helped save the day," he said. "Given her knack for anticipating problems, she had programmed the computer to ignore extraneous tasks in such a situation and to focus instead on the landing."

Thanks to her foresight, the lunar module safely alighted on the moon's surface, mission control cheered, and "Hamilton became a NASA legend," Robbins said.

For the young readers who pick up his book, Robbins said he hopes they'll find Hamilton as inspiring as he does.

"I hope they'll find a strong female role model in Margaret Hamilton: someone determined to overcome unfair conditions and do good in the world," he said. "I hope the book inspires them to creatively solve problems the way Hamilton did, particularly girls who sometimes don't get the encouragement they need in STEM or other fields. In my wildest dreams, readers of 'Margaret and the Moon' will grow up to make the next great breakthroughs in whatever they choose to do."

You can buy "Margaret and the Moon" on Amazon.com.