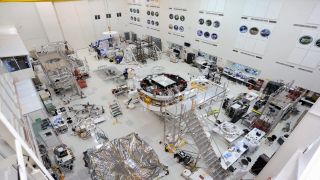 NASA's next Mars mission is slowly coming together in a "clean room" in California. Technicians at the agency's Jet Propulsion Laboratory assembled the capsule that will keep the Mars 2020 rover secure for its wild ride to the Red Planet's surface.

After leaving Earth next summer, Mars 2020 will spend about seven months flying towards the Red Planet before a spectacular entry at its destination, including a repeat of the famous "7 minutes of terror" sequence that brought NASA's Curiosity rover to the planet's surface in 2012. (The Mars 2020 rover and Curiosity have similar body frames, although they carry different instruments.) So, all the parts need to be secured in the Mars 2020's entry capsule in a process called "stacking."

"Stacking is an important milestone in mission development, because as good as our computer models are, we still need to put it together to show that the bolt holes line up and everything fits together," David Gruel, assembly, test and launch operations manager for Mars 2020 at JPL, said in a statement. "It is a great feeling for the entire project when we see the stack sitting there waiting to go for the next part of its journey, which will eventually lead to a launch pad at the Cape Canaveral in July of next year."

The stacking process includes both the real rover and a surrogate rover; the latter is being tested to make sure everything fits properly before using the real flight hardware.

In the most recent batch of checks, technicians placed the rocket-powered descent stage on top of the surrogate rover. After confirming that the holes in the stage and surrogate lined up, they performed a careful check before lowering the "back shell" — part of what protects the rover as it enters the Martian atmosphere — and checking the alignment.

Next, the team tested the fit of a parachute nose cone. This important piece will protect the parachute as the Mars 2020 shell slams into the atmosphere; once the fiery entry is over, Mars 2020 can safely deploy the parachute to slow its descent.

The Mars 2020 team finished the current stacking tests on April 3. Next, the spacecraft was sent to JPL's Environmental Test Facility for acoustic testing, meant to simulate the sound waves they will encounter during launch. Once those tests are finished, the next step is to check for loose bolts or attachment points. If all looks well, the stack will then spend a week inside of a thermal vacuum chamber that simulates the space environment, to make sure that the stack holds together during its cruise to Mars.

Even after the thermal trials conclude, testing isn't nearly complete. The stacked spacecraft will be returned to its assembly location for destacking, then more testing and work. "Nothing is static with this mission," Gruel said. "Until the hold-down bolts on the Atlas rocket blow and our rover is headed to Mars in July of 2020, there is almost always something being assembled, tested or modified."

It's a lot of work, but NASA has an ambitious mission that Mars 2020 must fulfill. The rover will search for signs of ancient Martian life, bringing it a step beyond Curiosity's successful science finds. (Curiosity has found plenty of evidence of potential habitability, such as water, organic molecules and methane, but it isn't designed to search for life itself.) Mars 2020 will also set the groundwork for future rovers by caching samples in sealed tubes that a later mission will retrieve for better analysis on Earth.