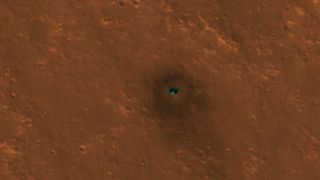 NASA's newly arrived Mars lander has been spotted by one its orbiting cousins.

The space agency's Mars Reconnaissance Orbiter used its supersharp High Resolution Imaging Science Experiment camera (HiRISE) to photograph the InSight lander, as well as the hardware that helped the stationary robot ace its Nov. 26 touchdown on the equatorial plain known as Elysium Planitia.

"It looks like the heat shield (upper right) has its dark outside facing down, since it is so bright (saturated, probably a specular reflection)," HiRISE principal investigator Alfred McEwen, of the University of Arizona, wrote in an image description today (Dec. 13). [Mars InSight in Photos: NASA's Mission to Probe Core of the Red Planet]

"The lander (middle) disturbed dust over a fair distance and has darkened the surface, as seen previously at the Phoenix and Curiosity landing sites," McEwen added, referring to the touchdowns of NASA's Phoenix lander and Curiosity rover in May 2008 and August 2012, respectively. "The bright spot associated with the lander is probably another specular reflection, and there are two smaller bluish extensions that are the solar arrays, plus their shadows."

HiRISE also captured InSight's back shell and parachute lying on the cratered red dirt. The streak appearing to emanate from the chute is probably a pre-existing track carved by a dust devil, McEwen wrote.

The $850 million InSight mission — whose name is short for "Interior Exploration using Seismic Investigations, Geodesy and Heat Transport" — launched in May along with two briefcase-size fly-along probes called MarCO-A and MarCO-B.

The bantam duo became the first cubesats ever to explore interplanetary space, and they also beamed home InSight data during the bigger craft's "6.5 minutes of terror" entry, descent and landing (EDL) sequence on Nov. 26.

InSight's EDL strategy relied on a heat shield, supersonic chute and 12 descent engines, which worked together to slow the craft to a human's walking speed at the point of touchdown. (There was no rocket-powered sky crane, like the one that lowered the heavier Curiosity to the Martian surface on cables. The sky crane will be back for NASA's next Red Planet surface mission — the 2020 Mars rover, whose body is based heavily on that of Curiosity.)

InSight will map the Martian interior in unprecedented detail using a seismometer suite and a self-burrowing heat probe, both of which must be placed directly on the Red Planet's surface by the lander's robotic arm. Deployment of these instruments will likely begin in the next few weeks, mission team members said recently.

The InSight team will also carefully track the lander's position on Mars using its communications gear, which should shed light on how the planet wobbles on its axis. This information, in turn, will reveal key details about the size and composition of the Martian core.

The data gathered by InSight during its nearly two-Earth-year mission will help scientists better understand how rocky planets in general form and evolve, NASA officials have said.

The $720 million Mars Reconnaissance Orbiter mission has been eyeing the Red Planet from above since March 2006, for a variety of purposes. The long list of tasks includes looking for signs of past water activity, gathering data about the geology and weather of Mars, and scouting out potential landing and study sites for future missions, both robotic and crewed.

This isn't the first rover or lander spotted by HiRISE, which can resolve features as small as a coffee table on the Martian surface. HiRISE has photographed the Curiosity and Opportunity rovers, for example, and the camera managed to find the United Kingdom's long-lost Beagle 2 lander a few years back, helping solve the mystery of what happened to that probe.