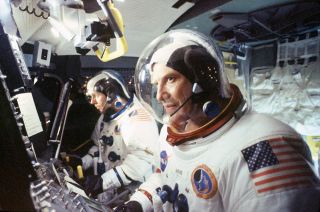 Ted Levine (right) and Gary Cole portray Apollo 14 crewmates Alan Shepard and Ed Mitchell in HBO's "From the Earth to the Moon." The 12-part miniseries has been digitally remastered for the 50th anniversary of the first moon landing in July.
(Image: © Anthony Neste/HBO)

HBO is once again launching its viewers "From the Earth to the Moon."

To celebrate the 50th anniversary of the first lunar landing in July, the network is presenting an encore of its Emmy-winning 1998 miniseries that chronicled NASA's Apollo moon missions. All 12 hourlong episodes have been digitally remastered to be in high definition.

"To celebrate the [Apollo 11] anniversary, the standard-definition visual effects have been replaced with brand-new CG [computer graphic] effects that are based on reference models from NASA," HBO announced on Tuesday (June 25).

On July 15, all 12 digitally remastered episodes will be available to watch on HBO Go, HBO Now and HBO On Demand. Then, on July 20 — the 50th anniversary of the first moon landing — HBO2 will air a marathon of the complete series, starting at 8:45 a.m. (ET/PT).

HBO is also releasing "From the Earth to the Moon" on Blu-ray on July 16, with remixed audio in Dolby ATMOS and an "Inside the Remastering" featurette, which provides a behind-the-scenes look at the "decision-making process and work put into updating and replacing the previous CG effects."

Co-produced by Tom Hanks, Brian Grazer, Ron Howard and Michael Bostick, the same team behind the 1995 feature film "Apollo 13," HBO's "From the Earth to the Moon" follows the early years of the U.S. space program through the six missions that landed 12 Americans on the moon.

With a budget of $65 million, "From the Earth to the Moon" took over two sound stages at Disney-MGM Studios (today, Disney's Hollywood Studios) in Orlando, Florida, and was filmed at NASA's Kennedy Space Center at Cape Canaveral and Edwards Air Force Base in California, among more than 100 other locations.

"From the Earth to the Moon" was based on Andrew Chaikin's 1994 book, "A Man on the Moon: The Voyages of the Apollo Astronauts." Apollo 15 moonwalker David Scott served as consultant.