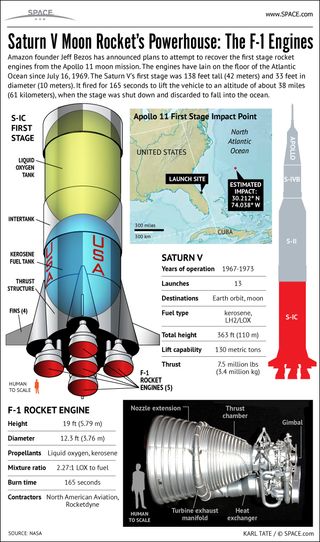 Billionaire space enthusiast and entrepreneur Jeff Bezos, founder of Amazon.com, has announced an audacious plan to retrieve the five massive rocket engines used to launch NASA's historic Apollo 11 mission to land the first men on the moon in 1969. The five F-1 rocket engines were jettisoned along with the rest of the Saturn V moon rocket's first stage after liftoff. For more than 40 years, they've sat on the floor of the Atlantic Ocean. See what the Apollo 11 F-1 moon rocket engines were like in this SPACE.com infographic.