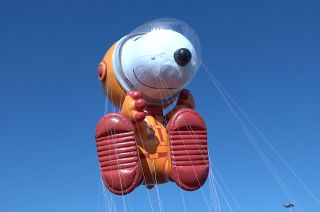 Astronaut Snoopy lifts off for a test flight prior to the 93rd Macy's Thanksgiving Day Parade in New York City. A forecast for strong winds threatens to ground the NASA-inspired balloon.
(Image: © Macy's)

Astronaut Snoopy is ready to fly, but like past spacesuited explorers, the weather may scrub his launch.

Snoopy is set to return to Macy's Thanksgiving Day Parade on Thursday (Nov. 28) as a new, NASA-inspired balloon in celebration of the 50th anniversary of the first moon landing.

Strong winds in New York City, however, may ground Snoopy and the other giant character balloons in the 93rd edition of the holiday event. The "go/no go" call for Snoopy to lift off will come in the final hours of the countdown to the parade.

Related: Here's What Astronauts Will Eat in Orbit This Thanksgiving

"It will be a game day decision," said New York Police Department (NYPD) Chief Terence Monahan in a press conference on Wednesday. "I just want to say my favorite balloon is back in the parade. Snoopy has finally made a return, so we're looking forward to getting those balloons down the route."

If Astronaut Snoopy does take to the skies, it will be his 40th parade appearance.

"Snoopy, as a character, has been designed as a balloon more times than any other character," said John Piper, vice president for Macy's Parade Studio, in an interview with collectSPACE. "This will be his eighth time being a new design for the Thanksgiving Day parade."

Have spacesuit, will travel

The first time that Snoopy flew in the parade in 1968, he was modeled after his Peanuts comic strip alter ego, the "world-famous flying ace." That balloon led to his first stint as an astronaut in the 1969 parade, the same year that "Charlie Brown" and "Snoopy" flew to the moon as the names of the Apollo 10 command and lunar modules, followed two months later by the Apollo 11 moon landing.

"At that time, Macy's would often take a balloon and transform it into a new design by changing the head and sometimes the pose," said Piper. "So the original Flying Ace Snoopy was then transformed into Astronaut Snoopy in his second life."

Back then, the Astronaut Snoopy balloon was adorned with a white spacesuit, blue boots and a "Snoopy" communication cap. Fifty years later, Astronaut Snoopy is now sporting a new look inspired by NASA's Orion Crew Survival System to be worn by crews on future Artemis missions to the moon and Mars.

The 2019 balloon has Snoopy garbed in a bright orange spacesuit with red-soled boots. On his chest is the NASA insignia, representing the partnership between the agency and Peanuts Worldwide to promote safety in spaceflight and science, technology, engineering and mathematics (STEM) education.

Topping the 49-foot-tall (15-meter) beagle is a bubble helmet, presenting a unique challenge to its inflation.

"This particular balloon will take up to two hours to inflate, in part because it's one of the only balloons where we actually have to go inside," described Piper. "We have to fill part of the clear dome with air to allow a team member to climb inside in order to fill Snoopy's nose with helium. [The team member] then comes back out, deflates the air and then re-inflates the helmet's dome with helium. So that is an extra step that most of the balloons don't have."

Small step for a giant balloon

Should the winds cooperate and Astronaut Snoopy fly as planned, NASA hopes that the balloon will further engage children in the agency's activities and help inspire an interest in space exploration. It will also celebrate the efforts of NASA's employees.

"I'm seeing Astronaut Snoopy in the Macy's parade as extremely motivational for the workforce," said Barbara Zelon, NASA's acting communications integration manager for human exploration and operations at the agency's headquarters in Washington, DC. "I can't tell you how many people have reached out to us just so excited. I think it represents many years of achievements by the people who have worked on these programs."

"To see NASA represented in something so public [as the parade] with such a positive message is just awesome for the workforce," Zelon told collectSPACE.

With or without the balloon, the event will also include a Peanuts-themed float with Charlie Brown, Woodstock and two former NASA astronauts, Kay Hire and Janet Kavandi, on board to greet the crowd.

For his part, Piper said that he was looking forward to seeing Snoopy's launch.

"To have him be an astronaut is just another small step for that beagle," said Piper. "I'm thrilled that we're doing this balloon. I'm old enough that I can remember the moment that Neil Armstrong stepped off of the lunar lander onto the surface of the moon. I stayed up late to watch that as a kid."

"That was such an amazing moment in the history of space exploration and for the United States. And Snoopy is, I think, everyone's hero. Everybody loves Snoopy," he said.