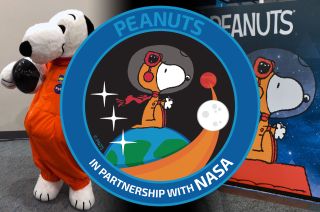 SAN DIEGO, Calif. — As it turns out, when it comes to the partnership between NASA and Peanuts, orange is the new beagle.

Snoopy, the comic strip dog created by Charles Schulz, debuted his new NASA-inspired orange spacesuit at San Diego Comic-Con in California on Thursday (July 19). The reveal was part of a panel discussion and sneak peek at test animation supporting an expanded partnership between Peanuts Worldwide and the space agency.

"We've been talking about him a ton and we know he has got some new duds, so we should probably bring him out," said TV Guide columnist Damian Holbrook, who moderated the "Snoopy Space Traveler: The History and Future of Snoopy and NASA" panel. [Sci-Fi to Snoopy: NASA's Coolest Mission Posters (Photos)]

With that, Snoopy walked out from behind a screen, decked out in a new bright orange spacesuit made from the same fabric as the garment astronauts will wear for missions into deep space.

"When Snoopy went to the moon, he was wearing the Apollo-style suit, the white suit," said Aimee Crane, a member of NASA's communications team and consultant on the Peanuts partnership. "Now that Snoopy is going to be joining us on the Orion spacecraft, we have the orange suit."

Snoopy first donned a spacesuit 50 years ago, serving as NASA's internal mascot to promote safety. The black and white beagle appeared on workplace posters and featured on an award, the Silver Snoopy, which honors NASA employees and contractors who contributed to mission safety and success in human spaceflight.

Then in May 1969, the Apollo 10 crew took the association even farther, adopting "Snoopy" and "Charlie Brown" as the call signs for their spacecraft. The mission, which served as a full-up dress rehearsal for the first moon landing two months later, "snooped around" the Sea of Tranquility from above, looking for appropriate places for Apollo 11 to touch down.

It was with that history in mind that NASA approached Peanuts with the idea for a new mission for Snoopy.

"We were talking at NASA about how we have a lot of anniversaries coming up next year. It is the 50th anniversaries of Apollo 10 and Apollo 11," explained Crane. "So as a group we really wanted to reach out to Peanuts and see if they wanted to do something."

"Little did we know, Peanuts was thinking exactly the same thing around the exact same time," she said.

Under a new multi-year agreement, Snoopy's internal role at NASA will now reach beyond the agency to help promote its deep space missions and STEM (science, technology, engineering and math) education pursuits.

"It really broadens our audience, especially when it comes to STEM and kids, so it couldn't come at a better time," said Crane.

"One of the big tentpoles of this partnership is to do a collection of animated content," said Betts. "We want this content to be what inspires the next generation to be interested in STEM, not just as an interest but also hopefully to pursue down the road as a career."

Two short animation tests were screened, one showing the characters rendered in 2D like they appear in the comics and classic TV specials, and one in 3D as in the 2015 "The Peanuts Movie" from 20th Century Fox and Blue Sky Studios.

In the 3D short, Snoopy was shown driving a rover and playing golf on Mars, with a twist reveal at the end. In the 2D version, Snoopy blasted off atop his doghouse for space, but not before having his flight plan scrutinized.

"The moon? You've already been to the moon! If you really want to impress people, you've got to go farther than that," said Lucy in her classic bossy tone.

The animations that will be released may blend 2D and 3D scenes to tell the story of Snoopy as he stows away on a field trip to NASA's Johnson Space Center in Houston, undergoes astronaut training and then blasts off on three missions — to the moon, to the International Space Station and then to deep space.

"With a character like Snoopy, we think he is perfect because he is the audience," said Betts. "He's curious, he is maybe a little over his head, but he wants to figure it out. So he gets to go along on that journey, as the kids at home watching it will, and he is going to learn as they are learning."

Imparting lessons can be difficult, though, when you have a dog who cannot talk, in a world where adults are voiced as muffled trombones.

"Those are two big challenges for us to get around, especially when we are trying to convey an educational message in each of these pieces. We want it to be light, though, so kids do not realize they're watching something that is educational," said Betts.

The animations and other elements of the partnership will roll out over the next year, but to kick it off and include one more bonus for attendees, Peanuts offered an array of Astronaut Snoopy apparel and collectibles created for and exclusively sold at Comic-Con.

See more photos of Peanuts and NASA at the 2018 San Diego Comic-Con at collectSPACE.