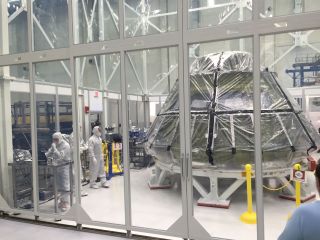 Technicians at NASA’s Kennedy Space Center work to get the Orion crew capsule ready for an unmanned trip around the moon in 2018. Photo taken Sept. 8, 2016.
(Image: © Mike Wall, Space.com)

The bulk structure of the Orion capsule that will be used for that uncrewed test flight, which is known as Exploration Mission-1 (EM-1), is now mostly complete, NASA officials said. Engineers and technicians have moved on to installing critical systems — for example, welding together the metal tubes that make up the spacecraft's propellant and other fluid lines.

This work is being done inside a large clean room at the Neil Armstrong Operations and Checkout Building here at NASA's Kennedy Space Center (KSC). [The Orion Space Capsule: NASA's Next Spaceship (Photos)]

"It's a very clean environment," Scott Wilson, NASA manager of production operations for the Orion Program, said during a media tour Thursday (Sept. 8).

"We need that for the reliability of the valves and things that have to work on the vehicle, as well as propulsion — fuel and oxidizers," he added. "If you have contaminants, it could cause contamination to stick valves or cause fires, that kind of thing."

The KSC team will wrap up their work with Orion in February or March of 2018, said Jules Schneider, Orion KSC operations manager with Lockheed Martin, NASA's prime contractor for the vehicle. The space agency will then work to prep Orion for EM-1, which is currently scheduled to lift off in October or November 2018.

EM-1 will mark the maiden flight of the Space Launch System (SLS), the huge rocket NASA is developing to blast astronauts toward Mars and other distant destinations. On EM-1, SLS will send Orion on a three-week flight around the moon designed to test the capsule's performance in deep space.

"We really want to run Orion through its paces and stress those systems as much as we can in an uncrewed configuration to make sure we've got the design and the ability to build the vehicles properly before we put crew on it," Wilson said.

Orion has flown to space once before. In December 2014, the capsule launched on an uncrewed 4-hour orbital jaunt known as Exploration Flight Test-1 (EFT-1). (EM-1 will use a new Orion vehicle.)

Astronauts will ride aboard Orion for the first time on Exploration Mission-2 (EM-2), which NASA has said will take place no later than 2023. But the agency is working to get EM-2 off the ground in 2021, Wilson said.