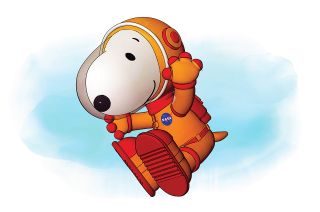 Snoopy will don an orange NASA spacesuit and float down the streets of New York City this November in celebration of the 50th anniversary of the first moon landing and the space agency's future missions.

Charles Schulz' comic strip beagle, which has had a long association as a safety symbol for NASA, will extend his record as the longest-running giant character balloon in the Macy's Thanksgiving Day Parade while advancing his new NASA mission to promote science, technology, engineering and math (STEM) education.

"When Peanuts signed a Space Act Agreement with NASA last year, we committed to working to bring the joys of space exploration and STEM into the lives of today's kids, and to honoring the legacy of Snoopy's history with NASA," Roz Nowicki, executive vice president of Peanuts Worldwide, said in a statement released by Macy's on Saturday (July 13). "We are thrilled that he will once again fly down the Macy's Thanksgiving Day Parade route, inspiring fans of all ages to look up and engage in the excitement of space."

Snoopy's first stint as an astronaut-themed parade balloon dates back 50 years, to the same year as the Apollo 11 moon landing.

"Snoopy flying in the Macy's Parade has become a tradition that fans from all over the world expect and have loved to enjoy for more than four decades," said Jordan Dabby, producer of the Macy's Thanksgiving Day Parade. "This year's flight will not only extend Snoopy's record as the character with the most balloon designs to eight, but will add a record-extending 40th flight in the Macy's Parade line-up."

"We are thrilled that he is coming back dressed in the style of a modern-day astronaut, after having first debuted as an Apollo astronaut in the 1969 Macy's Parade," said Dabby.

Snoopy's first giant balloon, which depicted him in a white spacesuit, flew in eight Thanksgiving Day parades. Subsequent balloons had Snoopy as an ice skater, as the "Flying Ace" hunting down the Red Baron, as "Millennium Snoopy" and flying along with his pal bird, Woodstock.

Designed by the artists of Macy's Parade Studio in collaboration with the Peanuts team, the new Astronaut Snoopy be joined in the Nov. 28 parade by his comic-strip friends, including Charlie Brown, who will ride aboard the Snoopy's Doghouse float with a few special guests.

Peanuts Worldwide has also been launching Astronaut Snoopy into stores, with a variety of products emblazoned with the character.

"We designed this collection so that kids can experience the wonderment of science and technology through Snoopy, the namesake of Apollo 10's lunar module and longtime safety mascot for human spaceflight," said Chieh Tsai, chief product officer at Lands' End.

In another Peanuts collaboration, The Skateroom, which creates and sells art edition skateboard decks to fund social skate projects for at-risk youth, is rolling out six Snoopy- and Apollo-themed boards this summer. A limited-edition "VIP" silver finish deck will be sold exclusively at Peanuts' pop-up store at San Diego Comic-Con from July 18 to 21; the other five will be available at art boutiques around the world.

Also at Comic Con, Peanuts will offer a selection of exclusive Astronaut Snoopy collectibles, including an embroidered replica of a vintage NASA pennant and lapel pins styled after Apollo-era designs. At another booth, Funko will offer an Astronaut Snoopy Pop! vinyl figure as a shared exclusive with Barnes & Noble.

Other Astronaut Snoopy offerings include two children's books from publisher Simon Spotlight, which are now available, and two Hallmark ornaments coming this fall, featuring Snoopy in his spacesuit and going to space as the Flying Ace atop his doghouse.

Click through to collectSPACE to see more Astronaut Snoopy products and collectibles.