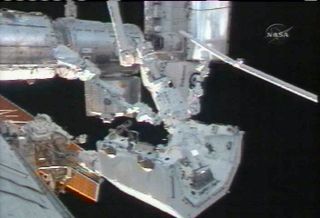 Astronautsinside the station remotely tested the brakes in the arm joints of Canada?s massiveDextre maintenance robot and geared up for a Monday spacewalk to attach itstool belt and other hardware.

Jean saidDextre easily passed each of its electronic systems checks, with all but one of14 intricate joints passing brake tests earlier today. The brake on a wristpitch joint at the end of the robot?s 11-foot (3.4-meter) left arm slippedslightly more than the general acceptable limit, but the glitch is not expectedto be a lasting concern.

?This issomething that we?re very confident that is not going to be an issue,? Jeansaid in a briefing here at NASA?s Johnson Space Center.

The 12-foot(3.7-meter) tall Dextre (pronounced ?Dexter?) weighs 3,440 pounds (1,560 kilograms)and sports two, dexterous hands designed to replace the role of a spacewalkingastronaut on simple fix-it jobs outside the space station. The more than $200-millionrobot is Canada?s third major contribution to the ISS and joins theCanadian-built Canadarm2 arm and a Mobile Base System for the roboticappendages.

Endeavourshuttle astronautsattached Dextre?s arms during a Saturday spacewalk after an earlierexcursion to attach hands to each of the limbs. Commanded by veteran spaceflyerDominic Gorie, Endeavour?s STS-123 crew is in the midst of 16-day mission todeliver Dextre, the firstpiece of Japan?s three-segment Kibo laboratory and spare parts to the ISS overthe course of five spacewalks.

?We?re just jumping the gun having fun moving the arms,? Reisman told Mission Control. ?It was reallyneat for us to see [Dextre] come to life.?

Reisman arrivedat the station aboard Endeavour last week and will stay aboard to relieve Frenchastronaut Leopold Eyharts as a member of the station?s Expedition 16 crew. Eyhartswill return to Earth with Endeavour?s STS-123 crew on March 26.

Behnken andfellow spacewalker Rick Linnehan will attach more pieces to Dextre during a Mondayspacewalk, the third of five planned for the STS-123 mission, which willinclude the addition of a tool carrier, a spare parts platform and the removalof several thermal covers. The robot has fully recoveredfrom a power glitch, since traced to a faulty cable on its carrierplatform, which delayed its activation last week. The hefty repair robot hasgained the nickname ?Mr. Dextre? from its flesh-and-blood astronaut crewmates.

?We?veworked on Dextre for about 10 years now,? said Jean, adding that the station?s Canadarm2is still referred to as ?it.? ?I guess as we started treating it like one of thegang. Dextre has become kind of an entity.?