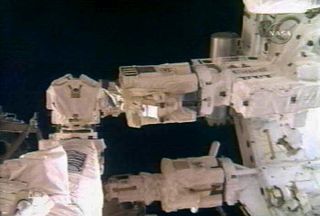 The space station's robotic arm (left) attaches to a power data grapple fixture of the the Dextre robot (right), which is secured in a high-tech shipping pallet.
(Image: © NASA TV)

NASA andCanadian mission managers said Friday morning that a flawed cable in a palletcontaining the pieces of the 1.7-ton robot, namedDextre, was to blame. To prove the hypothesis, astronauts grappled Dextre's "head" with the space station's robotic arm around 9:59 p.m. EDT (0159 GMT March 15) — a power-providing move thatcircumvented the flawed wiring.

"Iguess I have to say it: It?s alive!" Pierre John, acting program managerfor the Canadian space station program, said here at Johnson Space Center after Dextre's successful power-up. "This morning ? I was cautiouslyoptimistic," he said, "but the proof is in the pudding."

Jeanexplained that the electricity now feeding heaters should keep the robot'svital electronics from being damaged by the harsh cold of space.

Dextre is aservicing robot designed to cut back on the number of dangerous spacewalksastronauts will perform outside of the space station. Led by commander DominicGorie, the STS-123 shuttle Endeavour mission delivered Dextre's pallet to theISS on Wednesday and Japan'sfirst orbital room on Friday morning.

Shortly afterthe platform's attachment, however, mission controllers found that theircommands to route power to the robot failed, as did a Friday afternoon softwarepatch aimed to solve the problem.

Jean saidthe problem can ultimately be traced back to a mistake made when engineers wereasked to change the way Dextre's pallet was powered by the space station. Heexplained that the cable was not broken — it just wasn't the correct kind forthe powering system, preventing the space station's computersfrom communicating with the high-tech robotic pallet.

"Thecable design wasn't updated for the system," Jean said of the oversightthat blocked the flow of electricity. "It was one of those things thatsometimes happens. I don't think you can really lay blame ? on anyone."

ShuttleEndeavour and its seven-astronaut crew launched from Cape Canaveral, Fla.'s Kennedy Space Center on March 11 and docked at the space station on March 13. The100-ton orbiter is slated to return to Earth on March 26.